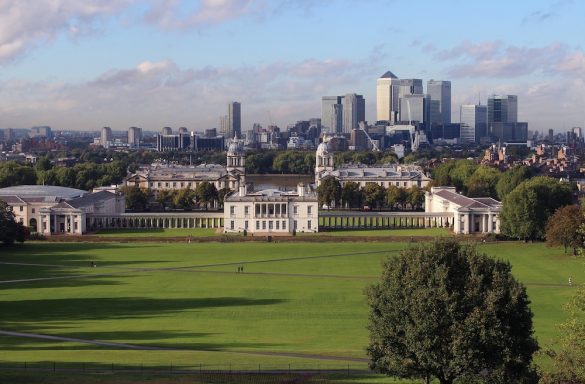 Away from the hustle and bustle of central London, Greenwich is one of our favourite London spots – with plenty of things to do. (And with over 28 years of living in London, we know our way around!) History buffs will feel right at home here, as will those who love a good view! What’s more, Greenwich has some great budget-friendly accommodation options that can be a smart alternative to many of London’s overpriced hotels.

This is a guest post by our friend and long-term resident of our second favourite European country 😉 . Karen is a writer living in the Netherlands who writes on Local Holland.  She has a weakness for a good British cider, a great curry, cats, and history.

For those looking for a break from the crowds of Central London, Greenwich is a breath of fresh air.  This town turned Borough of London is full of beautiful Georgian and Victorian buildings, lush parks, and historic institutions.  If you’re considering exploring taking a day to explore Greenwich, this guide will cover the best things to do in Greenwich.

In a hurry? Search accommodation in Greenwich here! 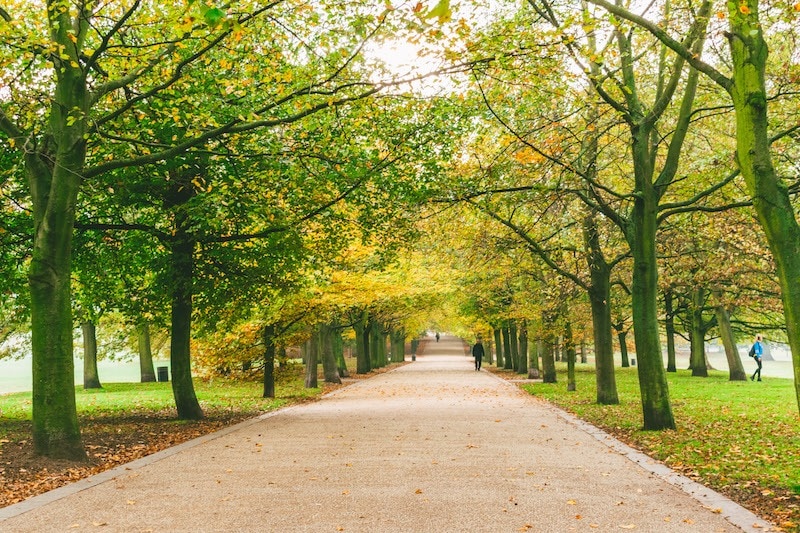 Take a walk through Greenwich Park | Photo by Karen

Greenwich has been documented to exist prior to the Domesday Book although it was often considered separate from London.

Since the 1300s, a royal palace (often for hunting) has existed in Greenwich, which was a favorite of monarchs looking to escape London.  Although Greenwich certainly has royal elements today due to the Old Royal Naval College, the Queen’s House, and the Royal Observatory of Greenwich, the town feels more down-to-earth. Although Greenwich is just a few tube stops away from Central London today, it still feels like a British town miles away from the hubbub of London’s financial district with its many tourists.  Within the cute town, you’ll find cozy little pie shops, a lively market, and a few free institutions that are free to visit (thanks to public funding).

How to Get to Greenwich

In order to travel to Greenwich, you can opt for the unique “Thames Clippers” as a form of transportation, – these are ferries which sail down the Thames and depart from Westminster Pier just outside Embankment tube station.  For a less scenic view, you can go for the tube and DLR (Doclands Light Railway).  If taking the Tube and DLR, change from the Jubilee line at Canary Wharf station, and change to the DLR heading southbound towards Maritime Greenwich DLR Station, which leaves you off in the historic centre of Greenwich. 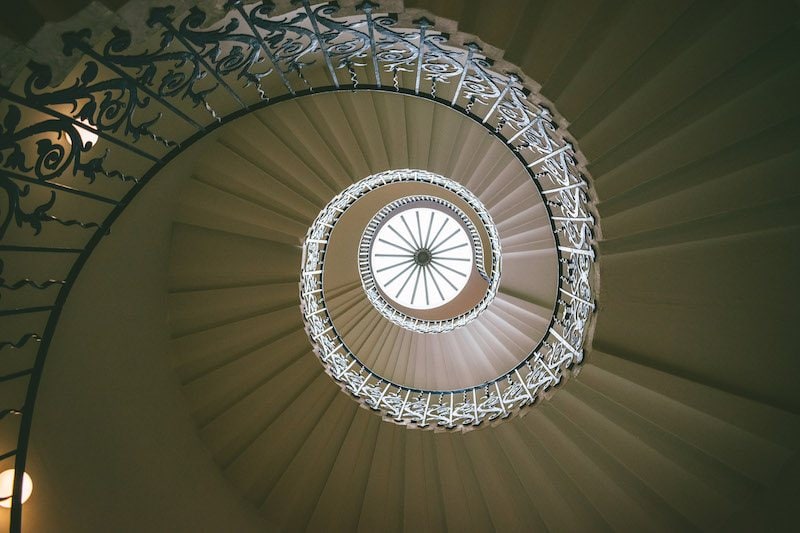 Spiral Staircase at the Queen’s House | Photo by Karen

Things to see in Greenwich

There’s no shortage of things to do in Greenwich! You could come here on a day trip – but there are plenty of Greenwich attractions to fill a couple of days or more. We (Ed.) recommend spending a night in Greenwich as well, to give you a little of extra time to soak up the relaxed and cultural atmosphere here.

For a great morning pastry and coffee to start off your day in Greenwich, I recommend stopping off at Paul Rhodes or Peyton and Byrne for a great cup of tea or coffee with a pastry.  You’ll likely be overwhelmed with choices at both bakeries although Peyton and Byrne is better for those who prefer to enjoy their tea/coffee (possibly with a slice of delicious homemade cake!) at a slower pace.

One of the main attractions of Greenwich for British history lovers has to be the Cutty Sark.  This ship was one of the last tea clippers to be built prior to the advent of steamships.  It is one of the last remaining ships with the original construction to survive this period.

Today the ship operates as a museum for naval enthusiasts, which is included in the London Pass.  Without the London Pass, admission can be a bit pricey, however, you can opt for the Day Explorer package, which includes entrance into the Royal Observatory Greenwich and the Cutty Sark.  Without paying entry, you can still admire the ship from the exterior.

The Cutty Sark gets very busy at weekends and during summer holidays. Visit during weekdays if you can, and consider booking tickets online ahead of time to get a discount. You can also buy a “Day Explorer” ticket which covers many of the main attractions and museums in Greenwich. 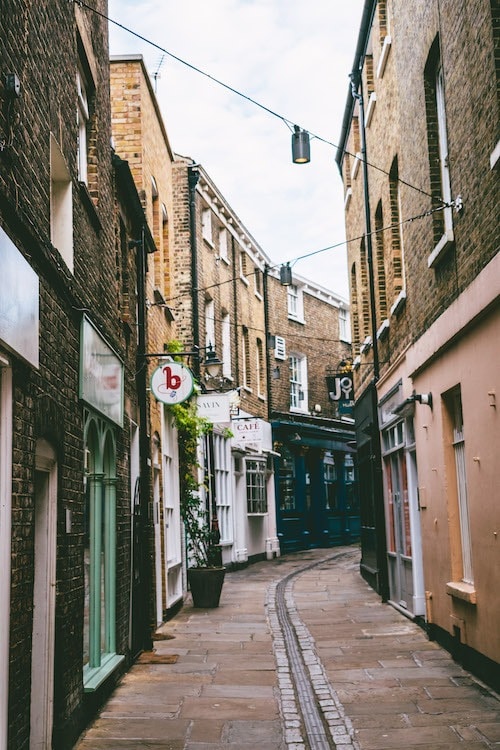 After seeing the Cutty Sark, I recommend passing through the impressive gates of the Old Royal Naval Academy.  Before doing so, stop off at Queen Elizabeth’s Oak, a fallen tree with a rich Tudor history.  It’s easy to miss, but worth a brief stop-off if you love history. It’s said that Anne Boleyn came here with King Henry VIII before her untimely death.

The grounds of the Old Royal Naval College are simply breathtaking for their massive scale. This UNESCO world heritage site served as the Royal Naval College until 1998.  Starting in 1873, the College trained naval officers. Even if you’re not a naval geek, the architecture of buildings is simply impressive, especially combined with the perfectly landscaped gardens. The Painted Hall at the Old Royal Naval College has been recently been opened to the public (for a fee).  This impressive baroque painted scene tells the story of British imperialism towards the end of the 17th century and some compare it to the Sistine Chapel. It’s free to enjoy the grounds and there are a few cafes/breweries within the complex now.

The National Maritime Museum, which is free to visit, it is a favorite of other visitors.  Inside, you’ll learn about the great British battle for naval dominance. It’s easy to spend several hours here exploring the interactive exhibitions and special exhibitions (for a little extra).

One of the highlights of Greenwich has to be the Queen’s House.  This former royal palace might be small, but it is a stunning building to explore and free to visit.  It is said to been built for Anne of Denmark as an apology after the King James I swore in front of her after she murdered one of his favorite hunting dogs.  Although she never lived to see the completion of the palace, it was the first Classical style buildings in the United Kingdom, which is famous for its impressive tulip staircase.  The beautiful staircase, which visitors have to climb as they admire the art within the museum, was the first self-supporting spiral staircase in Britain. It’s supposed to be haunted, but you’ll have to visit to find out if it truly is. Check the hours ahead!

Walk in Greenwich Park, the home of GMT

I loved wandering the grounds of Greenwich Park, which is full of lush trees.  The park used to be used as hunting grounds for the Royals, but luckily, commoners can enjoy the park without marrying a Duke or Duchess.  As you climb the hill, you have impressive views over modern London and the Thames river. This Royal Park of London is one of the largest parks in SE London with more than 180 acres. Within the park (near the top of the hill), you’ll find a flower garden with orchids.

Once you reach the top of the hill, you’ll be able to see the location of the Prime Meridan at the Royal Observatory Greenwich. Whether you knew it or not, GMT refers to Greenwich Mean Time, and (used to be) the centre of the world.

Even if you don’t choose to pay entry to the museum to take the famous photo straddling the line, you can still view the line from the gates. GMT was developed as a means of creating a standard system for naval charts and maps.   Due to the scientific discoveries that began from Greenwich, the world ended up adopting a time system that left tiny Greenwich at the centre of the world. The Royal Observatory is well worth a visit for science lovers. 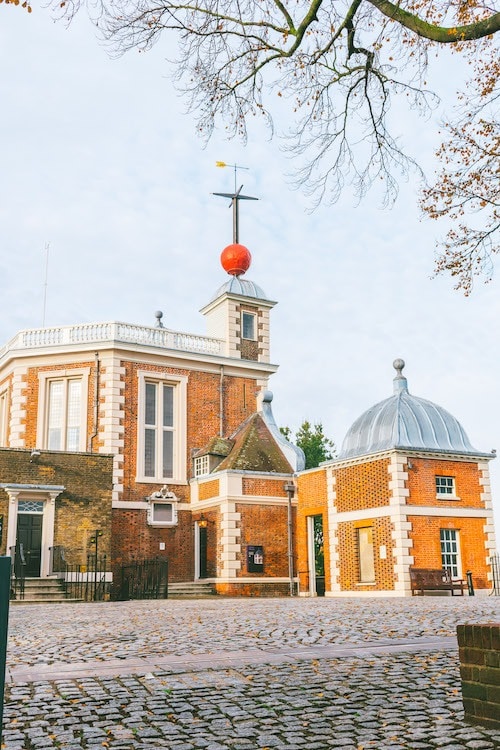 The Royal Observatory | Photo by Karen

Like many historic British towns, you’ll find classic Georgian and Victorian architecture within the center.  One of the most charming streets has to be the aptly named Turnpin Lane, which brings you to the heart of the Greenwich March.  A market has existed in Greenwich for more than 700 years, however, the current market is a bit modern. This is a great place to stop off for vintage shopping, unique souvenirs, and a bite to eat.  There are food trucks from all over the world within the market, perfect for holding you over until dinner. The Greenwich Market is open most days until 6 pm.

Within Greenwich, you’ll find a number of affordable typical British pubs to enjoy a classic British meal and a pint of beer. The Spanish Galleon claims to be Britain’s oldest brewer (as of 1693) although this claim is a bit debatable.  It’s still a nice place to enjoy a pint of beer and a pie. You’ll find numerous places to get a classic fish and chips for a reasonable price! 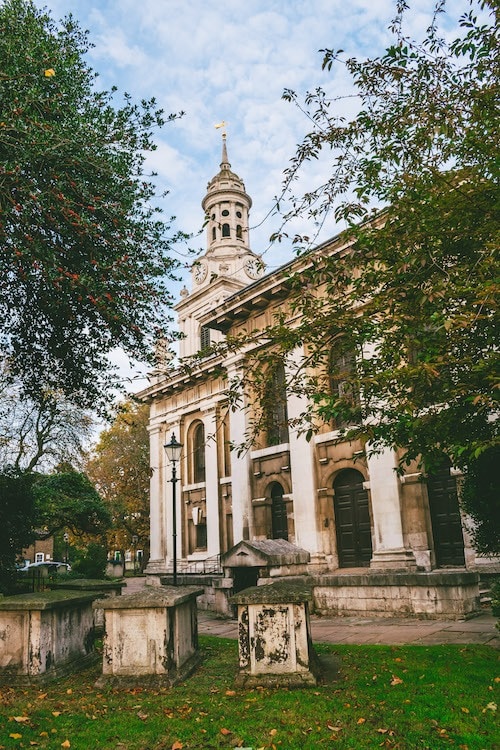 A church near the hotel in Greenwich | Photo by Karen

Where to Stay in Greenwich

I stayed at the Innkeeper’s Lodge London, which still has the old sign calling it the Mitre, which is a classic pub with an inn above.

Staying in London doesn’t need to be expensive and the price/quality of staying in Greenwich was good considering how easy it was to get to Central London by tube and the free breakfast included in the price. The Innkeeper’s Lodge overlooks St. Alfege church (and its cemetery), which was rebuilt on the site where Henry VIII was baptized.  (The old medieval church unfortunately collapsed.)

Got more time in London? We (Ed.) recommend heading further south to Blackheath – a lovely and quieter extension of Greenwich filled with good eateries and most impressively – a view looking down onto the Queen’s house, all of Greenwich, and London’s docklands in the background. Perfect for a sunny day!

Have you been to Greenwich? What did you like most? Let us know in the comments below!

Recommended for you on Soul Travel: 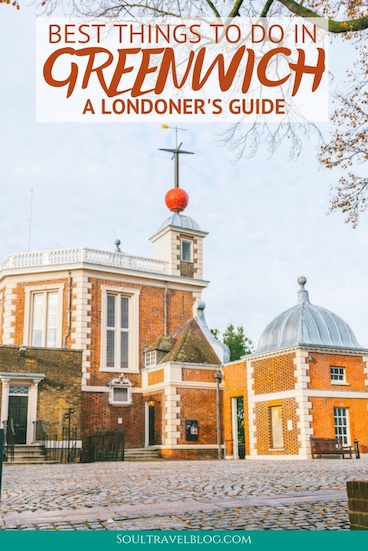 5 Reasons Why Travel to Nepal is on our Wishlist

The Best of Responsible Travel in London: A...