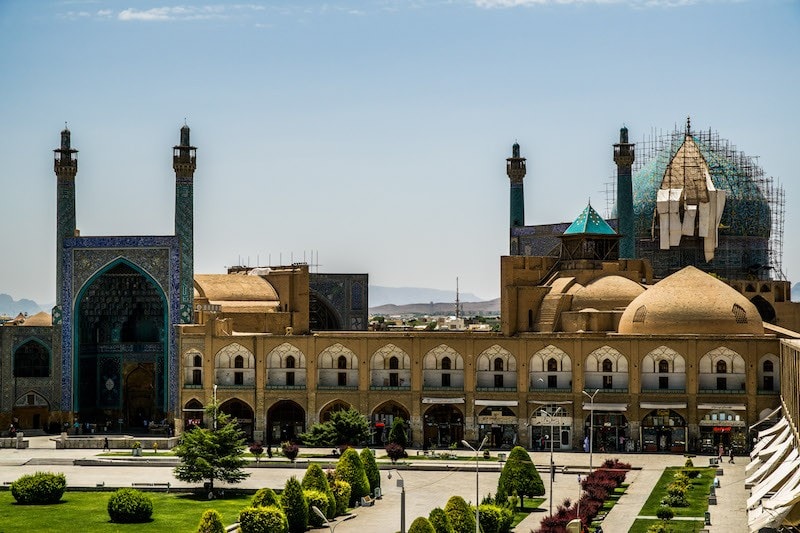 August 29, 2017
FacebookTwitterPinterestRedditStumbleuponWhatsappEmail
Editorial Disclosure: I travelled with G Adventures in Iran for 2 weeks on their Discover Persia trip. In return for a balanced review I was given a discount on my trip. As always, all views expressed here are purely my own and represent the views of Soul Travel Blog. For more information on what type of organisations I work with, you can read my Editorial Policy.
This post also includes affiliate links – which – if purchased through provide support for the ongoing running costs of this blog to me, at no additional expense to you!

Isfahan is Iran’s top draw. With some of Iran’s most beautiful mosques, palaces, bridges and architecture, it’s easy to see why.

But even for a country as un-touristed as Iran, Isfahan is starting to draw crowds. During my G Adventures Iran Trip this summer we heard that during high season (spring and autumn) it can be hard to find a place to stay in Isfahan. So if you find yourself here in busy months, here are some ideas to extend your sightseeing beyond the masses!

Looking on to Naqsh-e Jahan square and the Shah Mosque (with its dome under repair) from the Ali Qapu Palace.

The Discovered Half of Isfahan.

Isfahan’s (or Esfahan) main draw is its main square: the Naqsh-e Jahan square. Translated, its name means “half the world” – and they’re not far off. The second largest square in the world (second only to Tiananmen Square in Beijing), the Nasqsh-e Jahan is a sight to behold and cannot be missed. One of the best viewing points of the square is from above; from the 5th floor balcony of inside the Ali Qapu Palace.

Home to the Shah mosque, the Ali Qapu Palace, the Lotfollah mosque and Isfahan’s famous bazaar, it’s not surprising that most visitors flock here – and I’m not suggesting for a second that you skip it. Isfahan is as famous for its carpets as Isfahanis are for being good business people: so haggle hard! 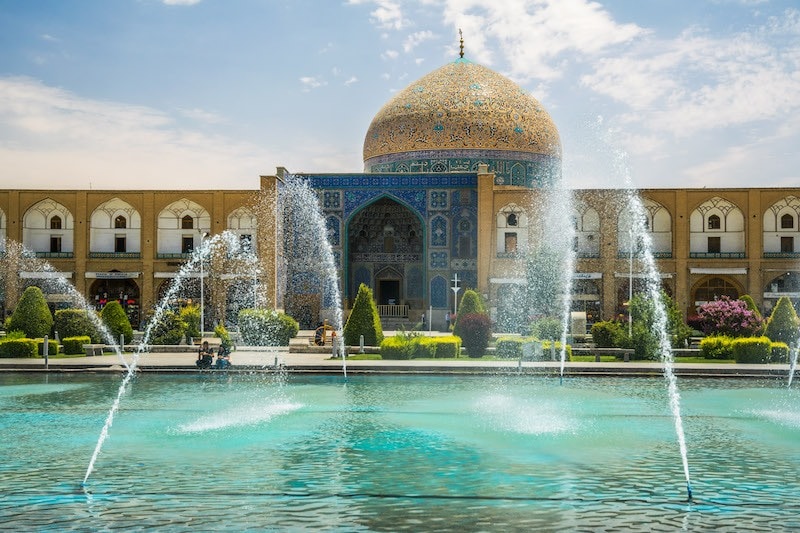 The views that Isfahan’s main square is famous for…

In summer, Isfahan history comes to life and the square is transformed as the sun sets and the temperature drops. The lawns are steadily filled with locals – armed with picnics – and the sound of chatter, laughter and music fills the air. Linger for more than a few minutes and you’ll likely be ushered in to join.

But things to do in Isfahan are not confined to the Naqsh-e Jahan square. Isfahan history can be found all over the city.

A walk away from the square, two of Isfahan’s many bridges: the Si-o-Se Pol and the Chubi Pol are beautiful and popular spots, especially in the evening. Note that there may or may not be water under the bridges: since a dam was built upstream, the Isfahan river (river Zayanderud) bed is only actually filled with water for a few months of the year. Iran is also experiencing extreme water shortages – be mindful of how much you use. When I visited in July 2017, the river was dry.

Want to read more about how to travel to Iran? Check out my posts on Getting a Visa in the UK and on How to Travel to Iran on an American, British or Canadian Passport. 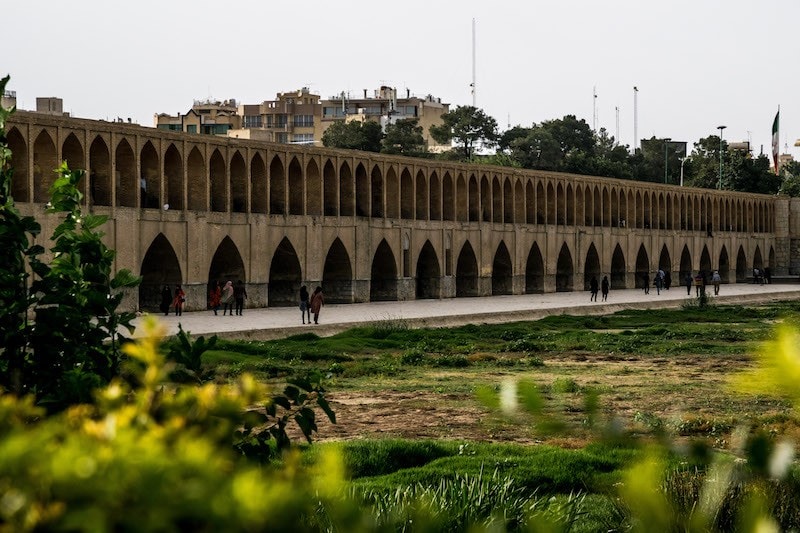 Off the Beaten Track: The Other Half of Isfahan.

Away from the main square, many more things to do in Isfahan come to light, such as the neighbourhood of Julfa. Set away from the centre of Isfahan it’s the perfect way to escape any crowds with a longer walk, practise your taxi haggling skills or get a taste of Isfahan’s Metro system to get here.

Wandering around the leafy and relaxed streets of Julfa feels like being in a different city. This area felt welcoming, youthful and is home to some hidden treasures of Isfahan history and culture.

Iran is proud to be one of the countries that provided refuge to Armenians during the Armenian Genocide in Turkey in the early twentieth century. As a result, the New Julfa area of Isfahan is home to the stunning Vank Cathedral, other churches and schools, and a population of over 10,000 Armenians. 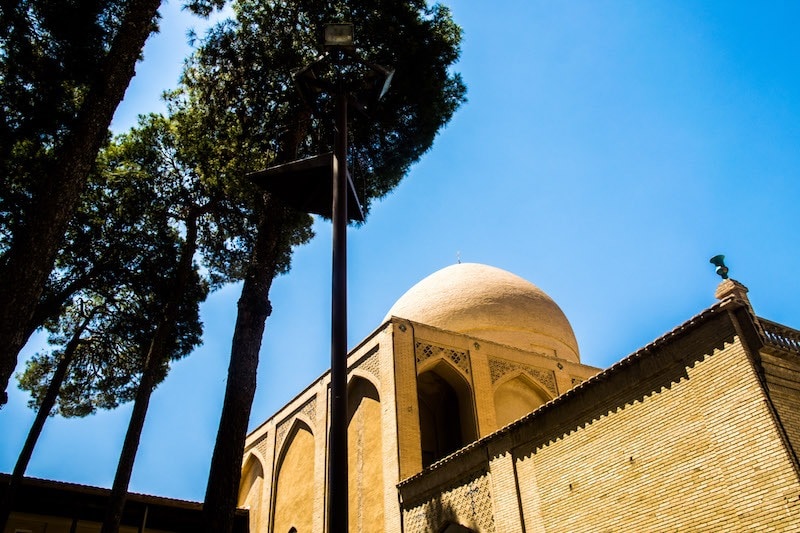 Outside the Vank Cathedral in Julfa, Isfahan.

The religious centre for Amenian / Christian Isfahan, the Vank Cathedral looks relatively simple and unassuming from the outside. That’s until you step through the door and gaze upwards at the intricate and brightly coloured painted frescoes – a treat for the eyes as much as the mosques are!

The Cathedral is surrounded by pretty gardens, and the grounds are also home to a museum about the Armenian genocide and history of the Julfa area, which is well worth a look. Given Iran’s current zero immigration policy, it’s fascinating to learn about the very different approach that was taken in the early twentieth century. 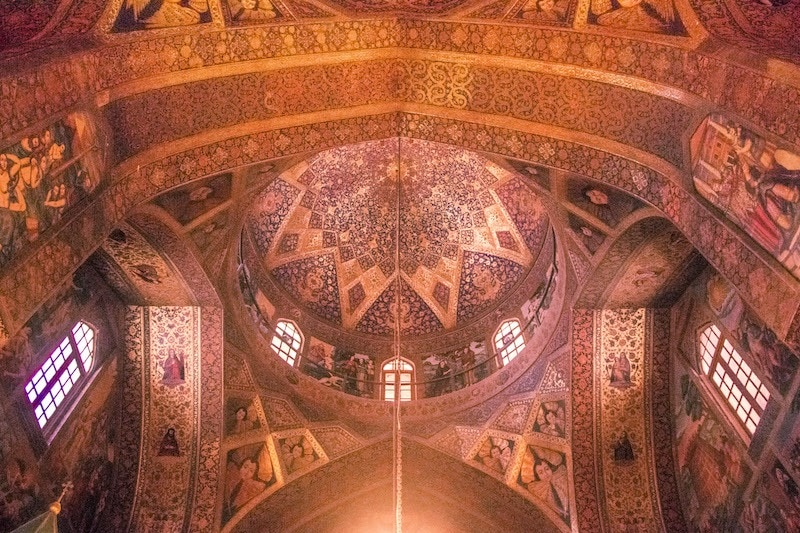 The stunning painted frescoes inside the Armenian cathedral.

This was a true hidden gem that our fab G Adventures tour guide, Mina, took us to. Unlike the majority of musems in Iran, this one is privately (vs government) owned and was a real experience. After a guided walk around the museum we were treated to a performance by the owners and some of his family and colleagues!

Coming here felt more like being welcomed into someone’s home as opposed to visiting a museum, thanks to the warmth of the hospitality. 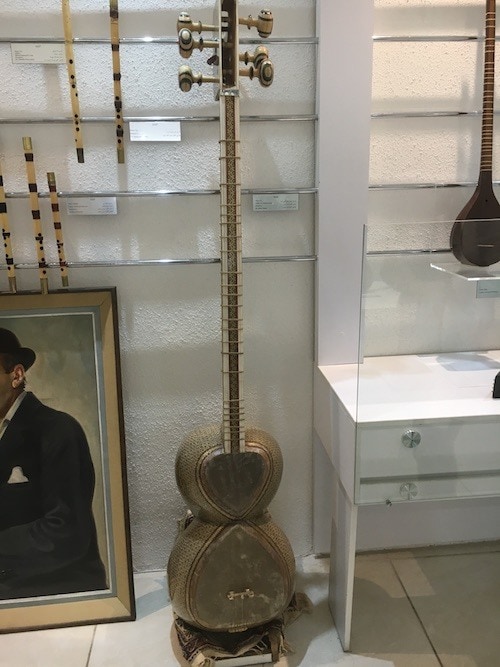 Instruments on display at the Music Museum 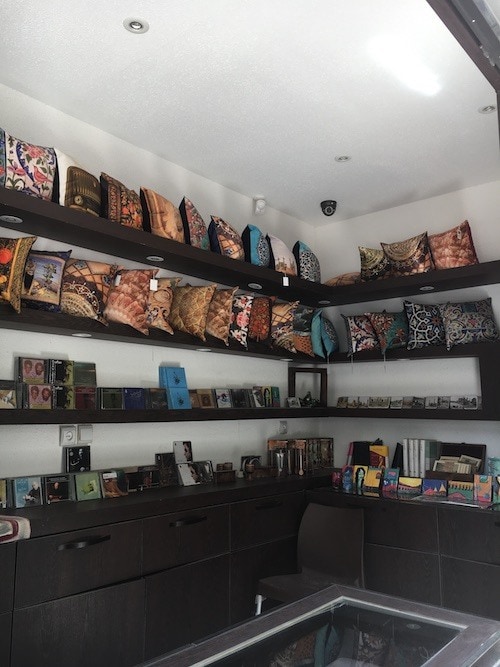 The Isfahan Music Museum is working hard to spread knowledge of Iranian musical traditions and culture: which are part of the backbone of Persian culture. Since the museum’s website is currently only in Farsi, you can read more about the museum in a Guardian review here. Since opening in December 2015 the museum has won two awards and is very appreciative of all visitors that come here! There’s a lovely cafe out front where you can relax in the shade.

Want to get further off the beaten path in Iran? Read about my experience Staying in a Silk Road Caravanserai here! 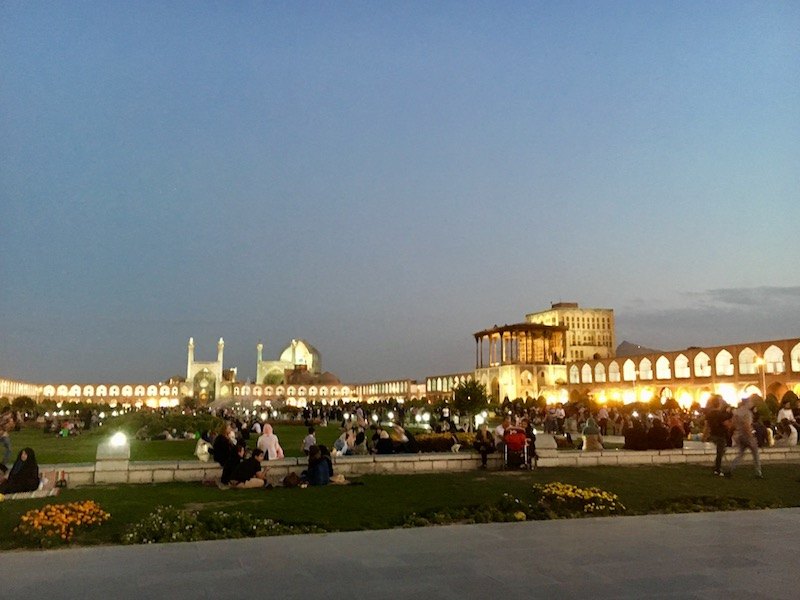 This pavilion, its name meaning “forty columns” was recently added to the Unesco heritage list. Set in a park it’s a beautiful place to wander around and gaze up at the architecture.

Best seen in the early morning to enjoy the reflections in the pool, this palace is another reminder of the Persian love for gardens. The porch is framed with imposing columns, and the great hall is painted with stunning frescoes and scenes of armies in battle. The palace dates from around 1650 but following a fire was rebuilt in 1706. 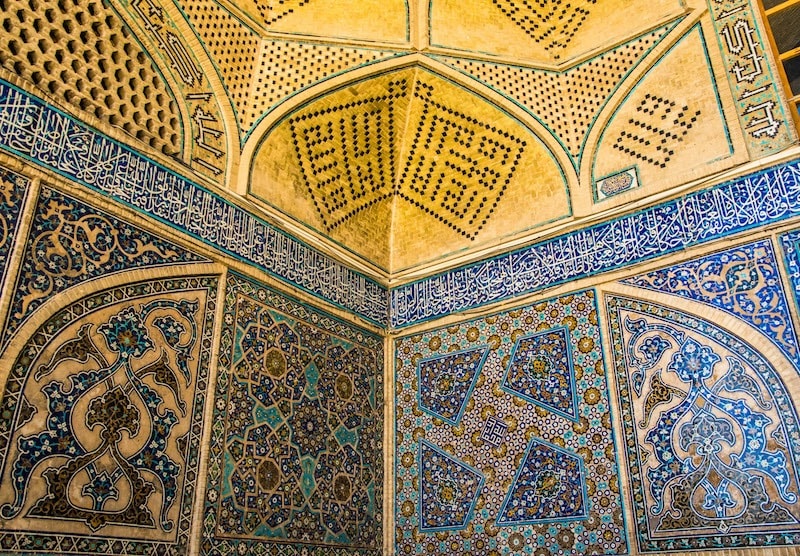 Mosaic work at the Jameh Mosque. 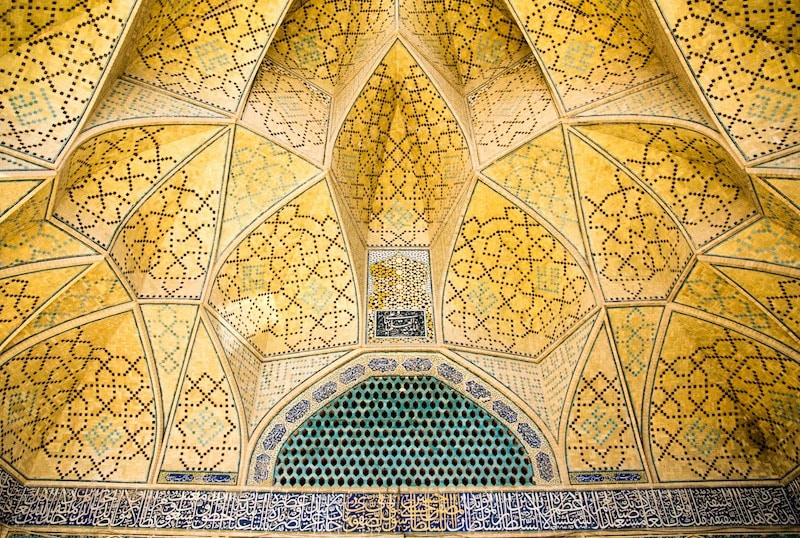 One of the porticos at the Jameh Masjid.

Often eclipsed by its more glamorous counterparts on the main square, this mosque may not be quite as “pretty”, but it has plenty of compelling reasons to visit of its own.

The Jameh Masjid is one of the oldest and largest mosques in Iran. Construction of the mosque started in the year 771 and is still ongoing! Given the size of the mosque, it’s understandable why. In the central courtyard, the mosque boasts an ablutions fountain in the courtyard that was designed to imitate the Kaaba at Mecca. 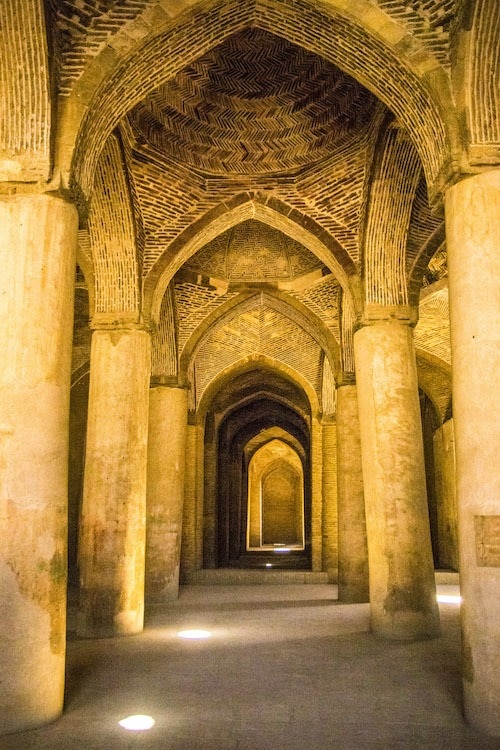 Columns and brickwork in the Jama Masjid 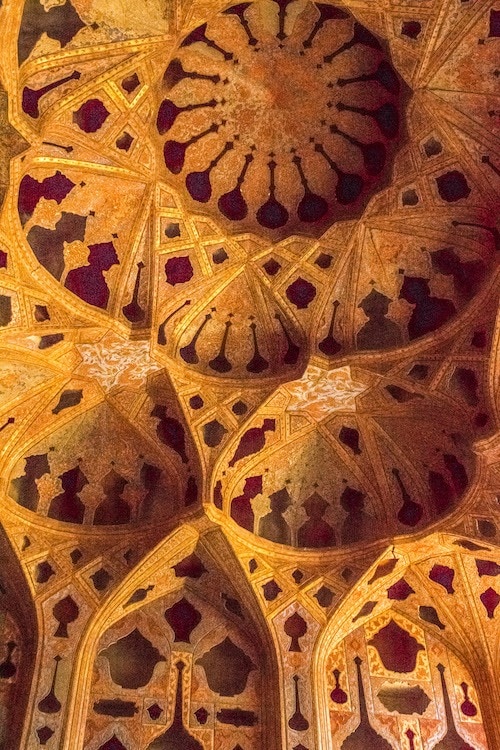 Don’t forget to look up!

Unlike the mosques of the Naqsh-e Jahan the dome is not painted or mosaic-ed. Instead it’s an intricate example of perfectly symmetrical exposed brickwork. This mosque is a great example of older Islamic architecture and different parts of the mosque are a living museum of the progression of Islamic design over the centuries.

Have you been to Isfahan, Iran? What other tips would you give or be interested in for exploring Isfahan? Let me know in the comments below!

Why Travel to Iran?!

I am so impressed by this destination. Chehel Sotoun Palace and the Jameh Masjid mosque look incredibly. I haven’t been to Isfahan yet, but now it is on my bucket list. 🙂

Thanks Karolina, Isfahan is stunning – hope you make it there some day soon! Happy travels, Ellie

[…] more on Iran? Check out my post on getting off the beaten track in Isfahan here or Staying in a Silk Road Caravanserai […]

Hi, thanks a lot for this post, Isfahan is really beautiful, I want to travel to Iran next month, would you please tell me how can I book hotels in Isfahan?

We just came back from one of the most wonderful experiences of travel that one could wish for, the Iranian people are so warm and gracious, their hospitality brings a tear to your eye, countless times a warm smile or a wave, or an engaging conversation. Our guide/driver was a walking encylopedia on the history of Iran, so informative, so wise. Hamid was all so a foodie and knew all the best places to eat, and remarkably when to get there before the rush. The sights of Iran, the Islamic art, it takes your breath away, I have had the good fortune of exploring much of our world, second time in Iran but guideless the first time, now I cannot say enough of how wonderful Iran is, I recommend Iran, it is the experience of a lifetime.

Hi Garry thanks so much for sharing your experiences in Iran! I’m very happy to know you had a great time – just thinking of the food is making me hungry :-).