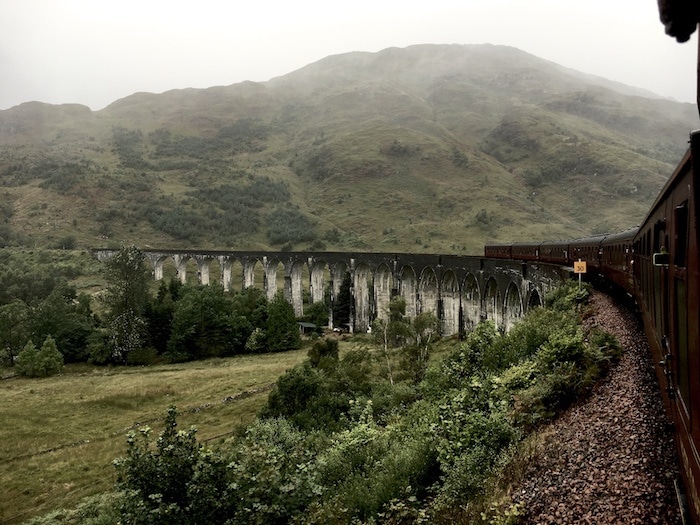 The London to Fort William Sleeper.

The Scottish Highlands have always held a mystical appeal to me.

And in my book—there’s no better way to travel than to fall asleep in the suburbs of London, muggy in the august heat, and waking up to the fresh air of the Scottish glens.

Waking up in time to eat porridge on my bunk as the train twisted and turned through pine forests and past lochs, on its way through the lowlands and up to Fort William will go down as one of the highlights of my trip. As a fan of overnight trains, I find that there’s something incredibly comforting about waking up to the clicking and rocking of the metal wheels on the rails.

This time I lucked out on the journey. I’d booked a twin share compartment (2 bunks)—and normally on Scot Rail trains they pair you up (with another passenger of the same sex)—but this time I was alone. I had twelve hours of peace and quiet.

You can book tickets for London to Fort William by train directly on the Scotrail website, and find more information on the other Caledonian Sleeper routes to Scotland here. I highly recommend this as a beautiful way to travel! If travelling to Edinburgh, the arrival is very early (around 5 or 6am) so you may not get the same benefit from the morning views!

Check for more information and prices for the Caledonian Sleeper from London to Scotland here! 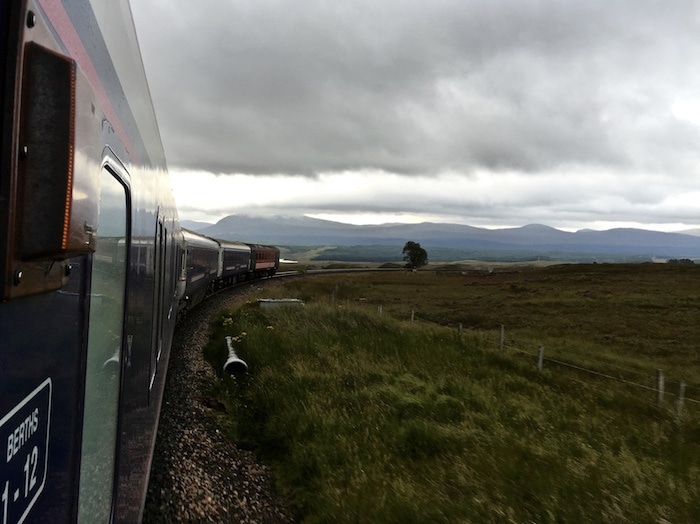 The Caledonian Sleeper winding its way through the Scottish Lowlands.

Arriving in Fort William mid morning the next day, I set out to explore.  Fort William effectively serves as gateway to the Highlands, and for many, that includes climbing Ben Nevis, the tallest mountain in the British Isles.  That wasn’t on my to do list this time, so instead I set off in the direction of Loch Lynne. 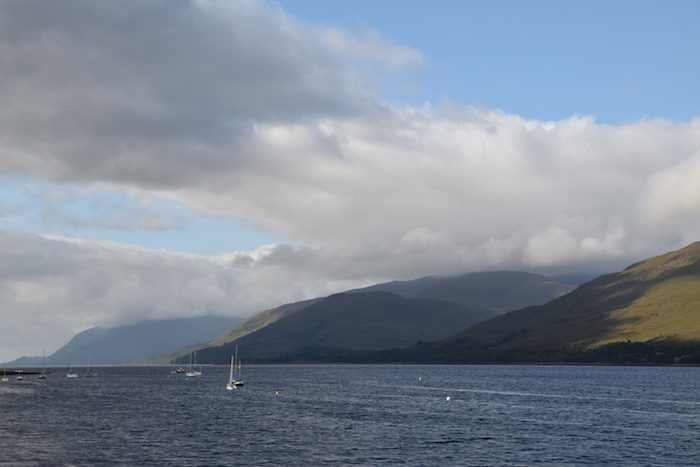 Loch Lynne flows south from Fort William to the sea at the southern end of the Great Glen which runs diagonally north all across Scotland—from the Atlantic on the west coast— to the North sea on the east coast at Inverness.  It marks the boundary of two tectonic plates, with the Northern part of the Scottish Highlands once having been part of North America instead of Europe.

I got on a fishing boat offering tours of the Loch, feeling slightly surreal that we were sailing over the edge of an ancient tectonic plate boundary. Fortunately, there were no earthquakes and we saw salmon farms, eagles overhead, and were promised seals too—but it seemed they were taking a break for the day.

Fort William has seen renewal and revival thanks to tourism.  The once struggling town that was only visited by avid climbers has seen a resurgence thanks to promotion and development of facilities, and it is now known as ‘the Gateway to the Highlands’. There’s a large number of hotels (ranging from basic hostels to castles), pubs and outdoor shops for those who find themselves not well enough equipped for travel in the Scottish Highlands. The West Highland Museum in Fort William is also well worth a look to discover more about the local history.

Want more on travel in Scotland? Read about my stay at a self-sustaining eco yoga retreat in the Highlands here!

The following day I headed out to fulfil a lifelong dream: to ride the Fort William to Mallaig ‘West Coast’ railway.  Better known now as the ‘Harry Potter line’ (you know, the scene in the second film where the flying car tries to catch up with the Hogwarts Express…). So I climbed aboard with a large number of kids and big kids alike to enjoy a two hour trip to the west coast of Scotland on the steam train.  No brownie points on this one for carbon emissions, but I decided that in this case supporting a heritage project outweighed the downside.

The West Coast Line to Mallaig.

The ‘Hogwarts Express’ is a must for HP fans: the carriages and train are pretty much exactly the same as used in the films, and there is even a Harry Potter merchandise shop on the train for those looking to lighten their wallets and line their pockets with wands, Bertie Bott’s Every Flavour Beans, and all sorts of other memorabilia. The train operators are clearly doing well out of the connection as trains get fully booked weeks in advance in summer months—so book ahead!

Hogwarts magic aside, the main reason I wanted to take this train ride was for the magic of the scenery.  The train passes over the famous Glenfinnan Viaduct, about 45 minutes outside Fort William.  The viaduct is the longest bridge on the West Highland railway, and in Scotland, and the views are stunning.  For history buffs, Glenfinnan is also where the Jacobite Rebellion of 1745 started, on the arrival of Bonnie Prince Charlie.

Further along the line the train winds through forests and past lochs, until eventually it reaches the rugged coast at Mallaig – known as The Gateway to The Isles (the Isle of Skye and beyond).

Glencoe was not in my original planning for this trip, but I’m glad I did not miss this one! A drive of about 45 minutes south of Fort William takes you past Loch Leven, and into the sweeping pass of Glencoe.  The day I visited was rainy and grey (like many other days in this part of the world), but that seemed to add to rather than take away from Glencoe’s beauty, with the low rain clouds and mist swirling around the valley.  In this case, pictures say it better than words. 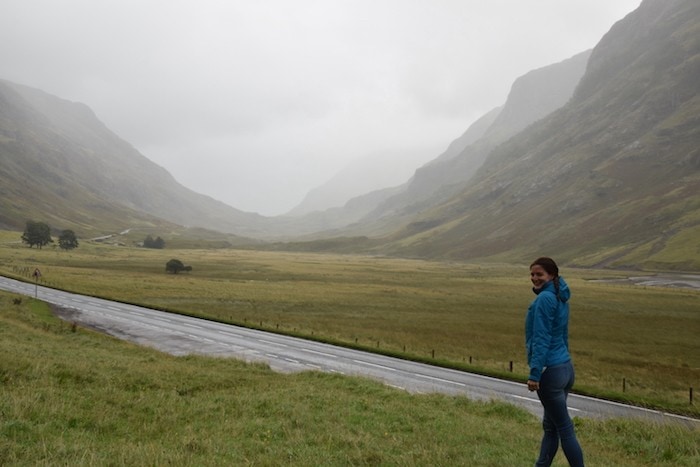 Looking down on Glencoe Pass.

In summer there are plenty of accommodation options for staying in these parts (as opposed to the towns) if country air is really what you are looking for. There are also plenty of places to camp outside the national park.

I boarded the night train to the Scottish Highlands not being sure what to expect.  What I found was a land full of friendly people, (in the UK it is often said that the further north you go, the friendlier people become.  Based on this trip, I tend to agree, even as a southerner myself), stunning scenery, warm cosy pubs to eat and drink in, and plenty to keep me busy without even climbing a mountain.

I found it hard to believe that such natural beauty and a feeling of wilderness exists so close to London. The Scottish Highlands are said to be one of the last wildernesses of Western Europe: I tend to agree. I do know that I’ll definitely be coming back to visit this part of the world again in time.

Have you been to Scotland or is it on your wishlist? I’d love to hear about your experiences and tips – please use the comments section below!

Venice and the Tide of Tourism.

Discovering Self Sufficiency at an Eco Yoga Retreat in Scotland.

[…] more time on your hands in Scotland? Check out my guide to Scotland by train or about read more things to do in the Scottish Highlands by Travel Hacker […]