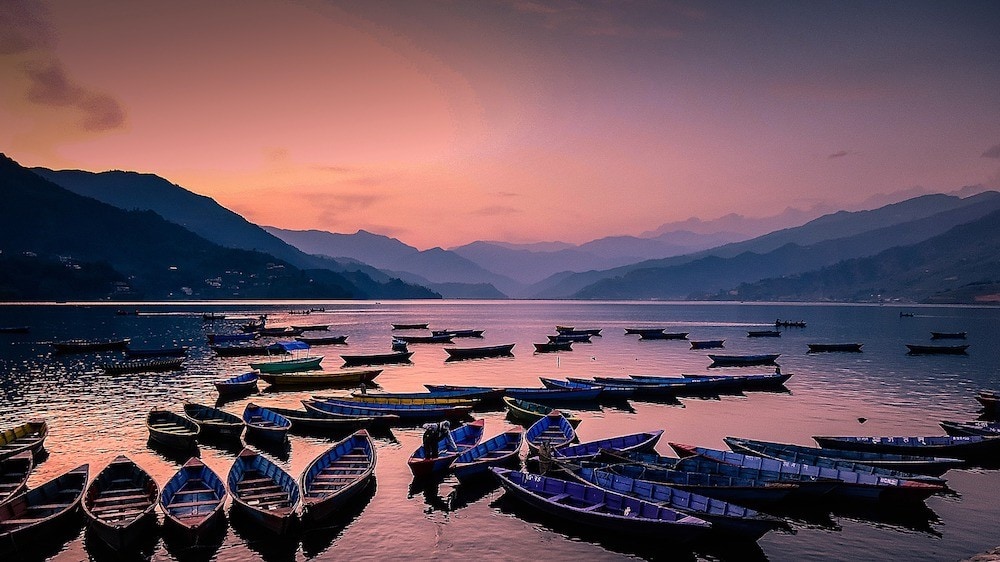 5 Reasons Why Travel to Nepal is on our Wishlist

Nepal: Land of the Gods (and of course Everest), has been a traveller favourite for decades. In 2015 Nepal, and its tourism, was hit badly by a huge earthquake. Nearly four years on, tourism is recovering and there have been fresh concerns about the sustainability of Everest treks in Nepal – but a visit to this Himalayan Kingdom is not all about its towering peak. Nepal calls to us for its rich culture, warm homestays and some exciting responsible travel options, too…

The Appeal of Nepal

Despite spending many months on the subcontinent – including a stint amongst the lofty peaks and valleys of Ladakh, Nepal has always been a step further away and we have yet to travel there: Something we are looking to remedy soon!

Known as the homeland of Everest, Nepal has always been a hotspot for trekking – to basecamp and on other famous treks such as the Annapura circuit – but that’s not all there is to do in Nepal. Visitors have been critically important to Nepal in recent decades, as much of the economy is reliant on tourism.

In 2015 when the massive earthquake struck, millions of people were left homeless as well as 9,000 dead. The country was left struggling for months and visitors stayed away. Nearly four years on, tourism is well on its way to recovery, but fresh concerns have been raised about the impact of trekking in Nepal, particularly the piles of trash left behind at basecamp. It is becoming increasingly important to travel with a conscious and responsible travel operator (we love the ethos of Sasane Sisterhood Travel), to support the local economy in a way that directly benefits local Nepalese, as well as to leave no trace behind you.

So why is Nepal on our travel wishlist? 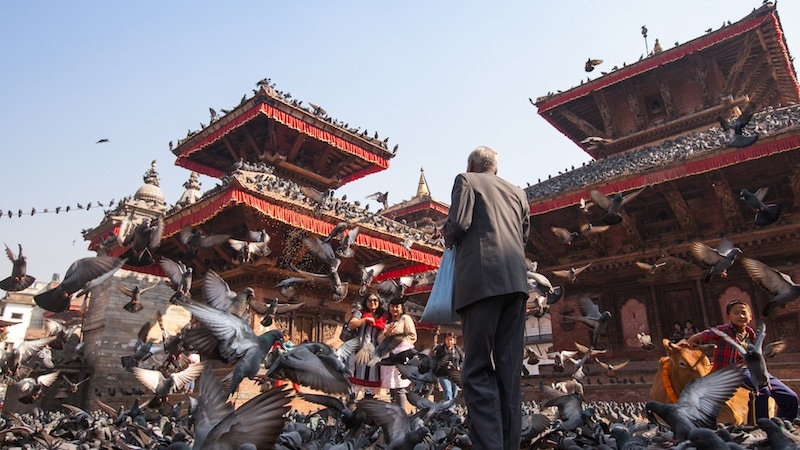 Reasons why Nepal is on our Bucketlist

Nepal is not all about its beautiful landscapes and mountains. It’s a melting pot of culture and religion (here you’ll find a mix of Hindu and Buddhist influence), with its capital – Kathmandu – home to most of the country’s UNESCO treasures, some as ancient as 2500 years old. The city’s Durbar Square dates from the 15th Century and contains many temples that are dedicated to Hindu deities. Although many of these were damaged during the earthquake, restoration initiatives have steadily been making progress, and the beautiful Bouddhanath Stupa has already been fully restored.

To experience Nepal is to experience the warmth of Nepalese hospitality and welcome. Nepal is a country that is dependent on tourism to a significant extent (economically speaking), which makes interaction with local people all the more important.

When travelling in Nepal it’s always better to support local businesses – from Trekking Companies to small locally owned hotels and homestays, to using local transport where you can. All of these allow interaction with locals beyond the traditional transactional tourist-host relationship and allow closer insights into the warm and family oriented Nepalese culture too.

If you feel called to help out by volunteering during your time in Nepal, we suggest reading our guidelines on Volunteering & Voluntourism here first, and avoid any volunteering opportunities that include contact with vulnerable groups of society (such as children).

There are a wide variety of trekking routes in Nepal, from the infamous Everest basecamp and Annapura circuits, to a number of other lower-profile routes. Any trek in Nepal requires a good level of fitness and at least some preparation, due to the altitude as much as anything – many treks reach heights of between 5,000 – 6,000 meters.

On arriving in Nepal it’s advisable to have a day or two to acclimatise to the altitude before starting trekking, too although Kathmandu sits at an altitude of 1,400m which is much lower than the passes you’ll hike, and even than Leh in neighbouring Ladakh. While you’re unlikely to feel effects from altitude in Kathmandu, there is poor air quality and lots of dust in the city which can affect your breathing.

While trekking in Nepal we recommend using companies who have are accredited members of KEEP (Kathmandu Environmental Education Project) – members of this association are checked to ensure that fair pay is given to porters and guides, education provided for their families, and overall fair working conditions (which unfortunately are not the norm in the Nepal trekking industry).

We also recommend using companies who accommodate you at homestays along the way as this allows more insight into the local culture and is more likely to benefit local communities.

The trekking season in Nepal is short – from May to September. If you’re planning a trip to Nepal and not planning to trek, we recommend visiting outside of these months.

When trekking in Nepal, avoid all use of single-use plastic. Pack your own filtered water bottle so you can fill up from rivers and taps (tap water is not safe to drink unfiltered), bring a thermos, bamboo or metal straws and consider some food containers too. Nepal is severely lacking in waste disposal infrastructure and much of the trash left on trekking routes has to be burned, releasing toxic chemicals into the air.

Last but not least – remember to bring good, worn in trekking boots from home.

The land of the Gods does not disappoint! From vistas over Pokhara Lake, to the sight of Everest rising in the distance, you will have plenty of views to admire.

Nagarkot is a popular hill station with some of the best broad views of the Himalayas – you can see eight of the 13 himalayan ranges from here. It’s located about two hours drive from Kathmandu.

Anthu Danda has recently been growing in popularity as a place to watch the himalayas come alive in the orange morning light. It’s about 12 hours away from Kathmandu.

Tengboche Monastery boasts amazing views of Ama Dablam from above the Sherpa capital of Namche Bazaar. To get here it’s a five day trek from Lukla. 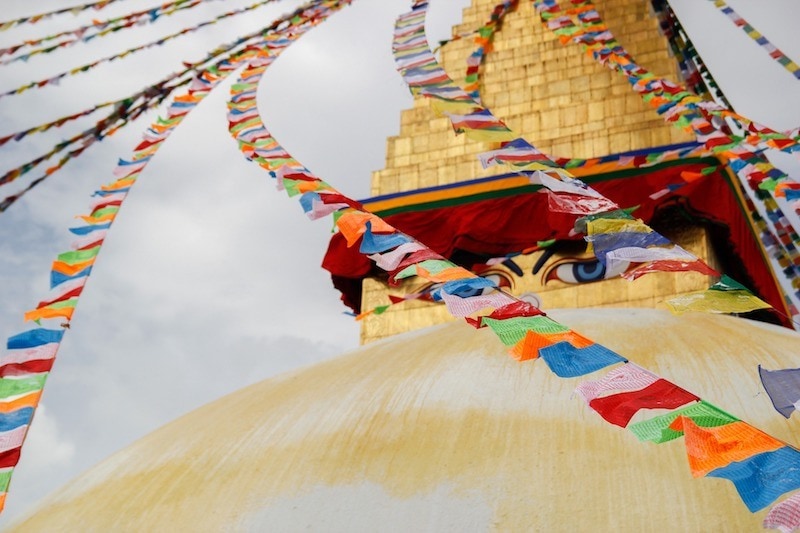 Nepal is home to no shortage of Buddhist monasteries, stupas and Tibetan-style prayer flags. After a hard slog up hill, what can be more cheering to the heart than to see a summit festooned with these beautiful flags?

Kathmandu is a great starting point to admire the Bouddhanath Stupa, and there are several other beautiful monasteries within easy reach of the capital city: Shechen Monastery, Thrangu Tashi Yangtse, Druk Amitabh Mountain Monastery and Dhagpo Sheydrub Ling. Many trekking and travel companies will be happy to arrange tours of some of the monasteries if you don’t feel like planning your own trip.

Have you travelled to Nepal? What did you like the most about it? Let us know in the comments below!

Recommended for you on Soul Travel:

Trekking in Ladakh for Beginners

Zero Waste Travel: How to be a Plastic-Free Traveller

This speaks to me so much! I’ve been wanting to travel to Nepal but not knowing where to start in terms of planning. My travels tend to be a bit more spontaneous and I love that, but I also know that traveling or trekking in Nepal requires a bit more research. Thanks for this post 🙂

Hi Jessie, happy to hear that! We can’t wait to make it there too – maybe 2020 will be our year! Happy travels,