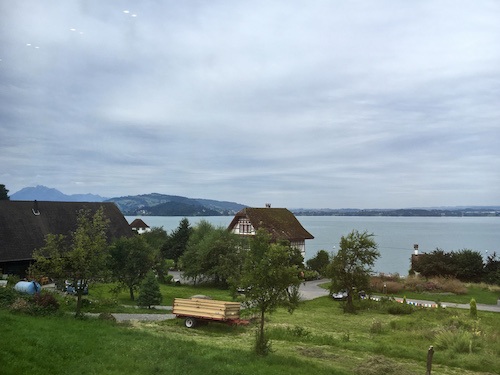 There’s always been something that has drawn me to the sleeper train journey.

Perhaps the idea of boarding in one city and waking up to the next, gently lulled to sleep by the rocking motion of the carriages on the rails.

The reality of course is often a little different than in our poetic (and often nostalgic) minds.

This time, i’d decided to give long distance train travel (and a touch of ‘slow travel’) a try.  Given that flying is by far the worst culprit in travel in terms of carbon emissions, with short haul being flights worse relatively speaking,  I’d decided to put my money where my mouth was and take the more sustainable route.  From Amsterdam to Tuscany.  A two hour flight or twenty hours, via Germany and Switzerland, by train. Leg number one was the sleeper train from Amsterdam to Zurich.

Swiss countryside flashing past the windows.

My route took me from Amsterdam to Zurich by sleeper train, and then Zurich to Milan, and on to Florence.  An alternative way of travelling is via Munich in Germany – a better option for reaching eastern Italian cities like Venice by train.

My first surprise was while booking the sleeper train to Zurich, and finding out that not only was the train more expensive than flying, but also that it was nearly fully booked, already 6 weeks out. I opted for a T-3 sleeper—a berth in a second class sleeper compartment.

I was joined in Amsterdam by an older Swiss lady, who’d had the misfortune to have been assigned top bunk.  When I say top bunk, the term ‘loft-bunk’ might have been more appropriate—the top bunk being at least 2 meters up and only accessible by the narrowest of step ladders: hardly the most suitable option for those over narrow-ladder climbing age.  Fortunately for both of us, the bottom bunk proved to be empty, and so she was able to use that instead. 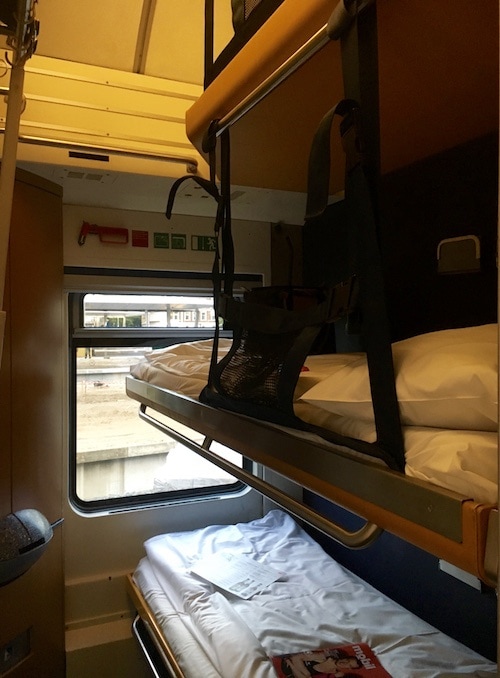 Above: 2nd Class T3 sleeper – the top bunk hardly fits in the picture.

We chatted about Amsterdam, the ever-growing number of tourists compared to the number of inhabitants (Amsterdam has a population of 850,000 and several million tourists each year), especially those on bikes in the city and the hazard that this represented for those walking, driving and cycling, and the best places to enjoy a slice of Dutch apple pie with a coffee over looking the canals and life passing by.  We talked about the fact that Deutsche Bahn plans to discontinue this train service later in the year, (a sad fact and one that seems particularly surprising given a) the ticket prices and b) the number of passengers on the train on a monday night) and how we preferred taking the train to flying. She asked me if I was studying in Amsterdam, a question which triggered a smile and I decided to take as a compliment, given that I finished my studies well over ten years ago.

The guard/attendant for our carriage cheerfully greeted us in German (turns out he spoke only German—something of an oddity for a train passing through three countries) and translated my English replies “coffee” instead of “kaffee” back into German out loud when he asked us what drinks we’d like with our breakfasts.

Mini – German language lesson complete, and safe in the knowledge that i’d be greeted with a coffee in the morning, I settled on my bunk, half taking in views of the green, flat Dutch fields filled with cows flashing by and the waining sun and half scribbling in my journal.

As the light faded and Dutch fields quickly faded into German ones, I decided it was time to tuck in under my soft duvet and crisp sheets. I slept fitfully, woken multiple times by the train stopping, starting again, and the whining of the wheels around sharp bends, and finally by the shunting of carriages as parts of the train were separated out, some heading off to Munich, whilst ours were separated off for Zurich. 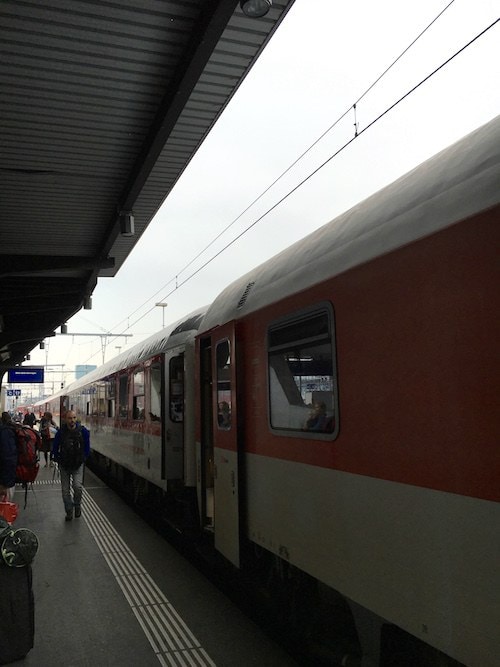 Above: Sleeper train on the platform once arrived at Zurich.

In the morning I awoke to the grey light of dawn and cloudy skies as we twisted through Basel, and then to the sight of mountainous valleys and alpine looking villages, peppered with lodge-style Swiss houses and twisting roads.

I find there’s something about the beginning of a journey, where one feels that at that moment, anything is possible.  And it is.  Falling asleep on the train in the knowledge that the landscape will look completely different in the morning from the one you left, that you will have crossed borders and languages into new territory.  It feels all the more real and physical on a train, perhaps because we stay on the ground.

Even bleary eyed after a disrupted night’s sleep, I felt a sense of excitement and achievement at having travelled so far, from the comfort of a clean bed, without leaving solid ground.

We arrived at Zurich Hauptbahnhof at 8am (in line with expectations of Swiss efficiency, 2 minutes before our scheduled time) to descend to the platforms filled with scurrying commuters and those (like me) waiting for connections on to Italy.

Feel inspired to take the train instead of flying on this route? Time is running out.  Deutsche Bahn (who own and run the City Night Line trains) plans to discontinue this and other sleeper services from Amsterdam and other European cities through Germany from October this year – you can sign a petition (translate from German) here. UPDATE: Unfortunately this route has been discontinued by Deutschebahn per 1 December 2016.

Do you love train travel? Or thinking of travelling overland instead of flying?  I’d love to hear from you in the comments below.

The Truth About Vipassana.

Sustainable Accommodation and Travel: Why Airbnb may not be the Answer.

Night Train to Lisbon: Amsterdam to Lisbon by...

To Hellfire and Back: Travelling the Thailand –...

[…]  Taking one of the last night trains to run from Amsterdam to Zurich. I love travelling by sleeper train (as you probably know if you’ve read the blog before!) […]

Back, when I was a kid, we always used to take the night train from Munich to Split (Croatia). It was wonderful waking up in another country near our holiday destination with a different vegetation and climate

Hi Peter, that’s wonderful to hear! It must have felt like a real adventure 🙂