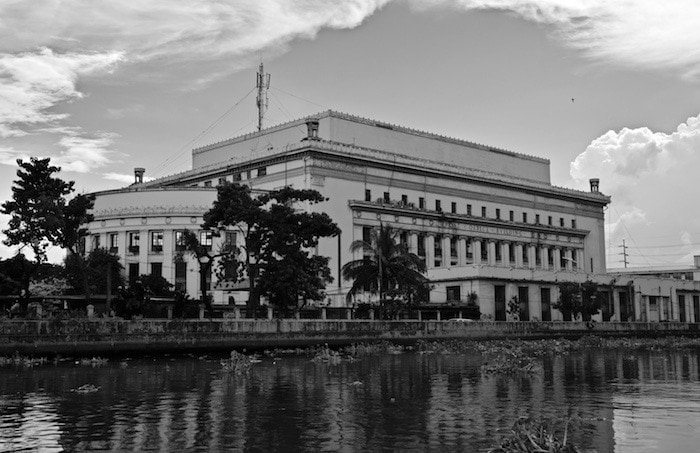 Off the Beaten Track in Manila: 3 Experiences that Changed my Perspective.

Preconceptions of Travel in Manila.

‘Manila’ never used to conjure up the most positive of images in my head. Mention ‘Manila’ and we build up images of a city choked with traffic, rife with crime and essentially a concrete jungle that is not known as the safest place in the world to travel.  Government travel advisories and the well-publicised current political challenges don’t exactly restore one’s faith in the city either.

For many travellers, Manila is a necessary stop rather than a stop of choice; a place to change planes or connect on to the islands of the Philippines.  Few seem to venture off the beaten track in Manila.

But after my time there in October, I began to see a different side of the city. One that would make me go back.

During my recent time in the Philippines I spent over a week in Manila. Initially headed there for a blogging conference (TBEX—where several hundred travel bloggers congregate to learn and meet with travel organisations), I decided to come back to Manila after a trip to Leyte to spend some much needed time online. During those seven days I met and spent time with locals from Manila, and got to explore different parts of the city—some parts which few locals, let alone foreigners have seen. I got to go off the beaten track in Manila.

And after those seven days in Manila? I might not be packing my bags to move to the city permanently, but I can safely say I have a more balanced view. Manila is something of a puzzle. It’s not a puzzle I don’t pretend for a minute to have figured out, but isn’t that one of the best things about travel?

Off the beaten track in Manila: My top 3.

For me, these are the experiences that changed my perspective of this city… for the better. 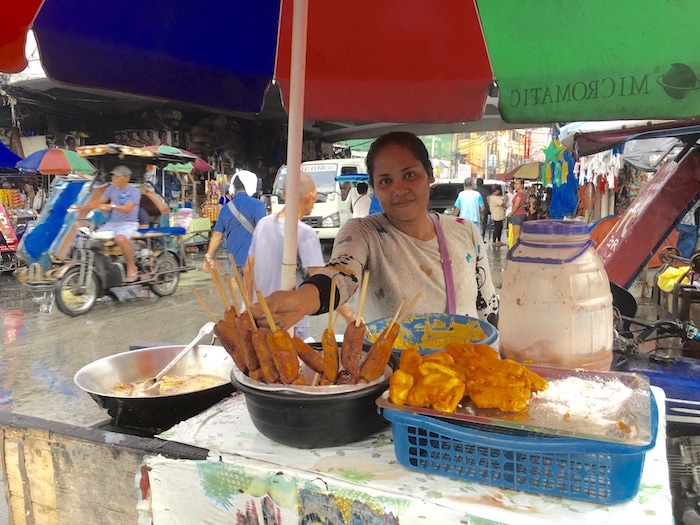 1. Exploring the Markets of Manila with I Like Local.

I wanted to see something a little different of the city. Wedged between the Escolta and China Town districts of the city, lies one of Manila’s largest food markets, Quiapo Market.  I went on a tour organised through I-Like Local, who are an online platform for responsible travel activities. The tour was run by local tour operator Smokey Tours who invest in training locals from underprivileged communities to become tour guides, and offer tours that are off the beaten track in Manila.

On my tour around the market, I saw Quiapo church, one of the largest in Manila, and home to the famous ‘Black Nazarene’—an iconic image carved in the 17th century which Filipino Catholics consider to be miraculous.

Around the markets I sampled delicious mangoes (the mangoes in the Philippines are the best I’ve ever tasted), different types of sticky rice mixed with chocolate, coconut and any number of sweet things, and a list of sweet treats that I can’t possibly remember the names of :-). I got a crash course in Filipino traditional herbal medicine, how to light candles to bring prosperity to all areas of your life (or buy black candles to wish misfortune on someone else—I did NOT try that one.) I also had a pretty funny tarot reading for the bargain price of 80PHP.  I’ll spare you my life forecast!

What I loved most about this tour though is that it takes you to a part of the city which is often passed by. I didn’t see another westerner during my time on the tour and felt like I was seeing the ‘real’ Manila. The market was not full of goods for sale to tourists but for and by locals—and that gave me more of a feel than anything of day to day life in Manila.

Interested in getting to the bottom of a destination through Responsible Travel Experiences? You can check for activities on I-Like Local here. 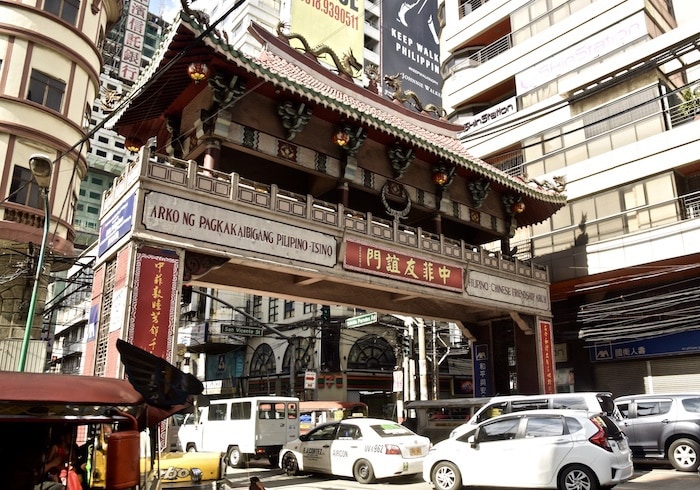 When I mentioned this to locals afterwards, a lot were surprised. It’s hard to get more off the beaten track in Manila (the tourist track anyway) than taking the Pasig River Ferry.  A fashion blogger friend from the city showed me the way, and it was on this ferry that I began to actually develop a fondness for the city.

I tried to forgive the city for its traffic problems, several times, and failed. I hated Manila’s traffic. I tried to remind myself that, as visitors, we are the lucky ones: we only have to put up with the traffic for a few days.  For residents of Manila, it’s a reality to deal with every day.  Those that have visited Manila will know what I’m talking about.  For those that haven’t, imagine it taking up to 2 hours to cross the city from Makati to Intramuros or Manila Bay—a journey that without traffic would take 20 to 30 minutes.

The Filipinos have an expression “Bahala Na“. It basically means “come what may” or “what will be will be”.  It’s the psyche behind much of daily life and can be applied to transport in particular, for better or worse. 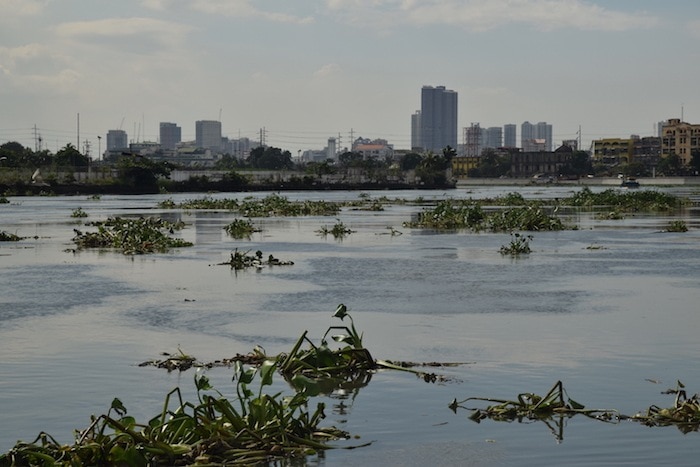 View from the Water: The Pasig River.

The Pasig ferry leaves regularly during daytime and takes just over an hour to get from Pasig Ferry Hulo near Makati to Escolta or slightly longer to Intramuros.  The river route takes you past the President’s residence (no photos allowed…) and past the Central Post Office—one of Manila’s most striking remaining old buildings. The ferry ride was one of the most enjoyable experiences I had during my time in the city as well as being one of the most relaxing ways to get around.

I loved seeing a whole new perspective of Manila from the water.

The Pasig River Ferry also supports the Pasig River Rehabilitation Commission – a government body that is attempting to promote better environmental care and conditions, and to rehabilitate the river for transportation, recreation and tourism.  They have work to do!

For more information on the Pasig River Ferry Schedules, MMDA has an App available on google play. 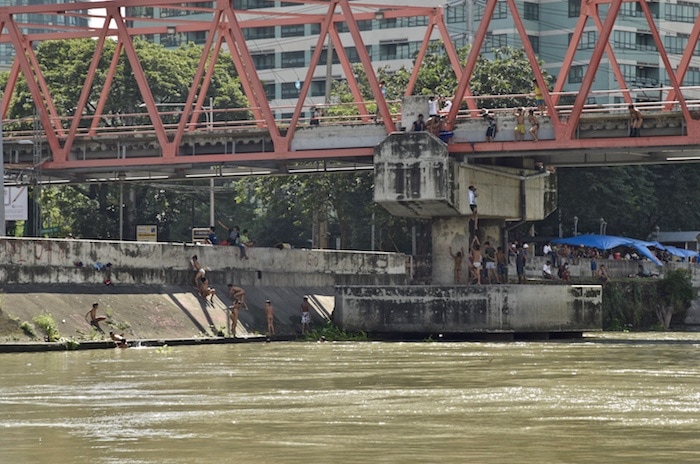 Kids jumping into the polluted river.

Due to heavy bombing during World War Two, most of Manila’s beautiful architecture was reduced to rubble seven decades ago. City is now a patchwork of condos, office tower blocks and huts. There are a handful of older buildings that remain, but to see them you need to go off the beaten track in Manila.

Escolta is home to the old Central Manila Postoffice, the Bank of the Philippine Islands, the Calvo Building and a smattering of other structures mainly dating from the ’20’s and 30’s, that give a hint of what the city once was: the city’s premiere business and shopping district.

Today the district is littered with decaying but striking buildings, and the energy of the neighbourhood is starting to change—for the better. Escolta is becoming a hub for artists and entrepreneurs who are breathing new energy into the area. I visited ‘The Hub‘ on Escolta Street, which is a ‘collaboration space’ where artists congregate, and on the ground floor small artisan stalls sell their goods. It’s also home to a small exhibition on the history of Escolta with some beautiful—if haunting—photographs of how the area used to be.

Compared to Intramuros, Escolta is an example of the city’s more recent history and shows some of the best and worst parts of Manila: the classic architecture, and the lack of investment into maintaining it. 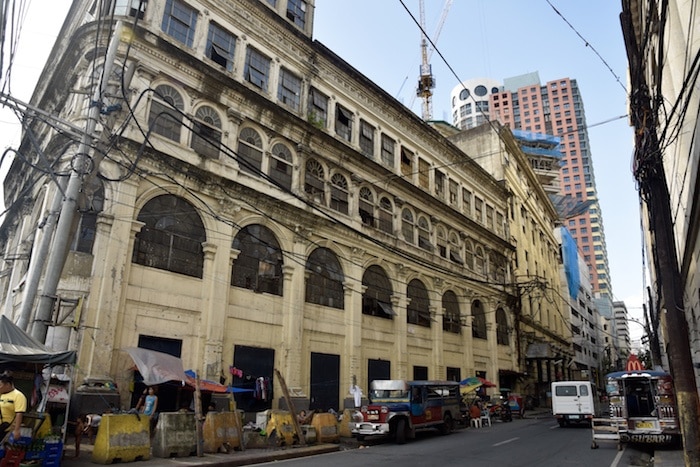 The Calvo Building in Escolta.

Outside of these top three, there’s one other aspect of off the beaten track Manila that endeared me. Its people.  Far from seeming dangerous, I felt relatively safe in Manila (I did listen to advice and did not walk around most areas at night).  The reason I felt safe was the people I met, who just like in the rest of the Philippines I found to be kind, curious, helpful and most of all welcoming. And that’s what I’ll remember with most affection about the city.

Looking for somewhere to stay in Manila? I stayed at the newly opened Element Boutique Hotel in Makati. The hotel is in a buzzy part of town and is run by a lovely French-British couple and serves amazing food in their restaurant. The hotel doesn’t have an eco or sustainability rating, but they are doing great work by employing locals from underprivileged backgrounds and those with disabilities who have a hard time finding good work in the Philippines. You can check rates and availability here.

Editorial disclosure: I’d like to thank I-Like Local for hosting me on the half day Manila Market Tour.  As always, the opinions and recommendations expressed here are my own.

Would you like to support Soul Travel Blog?  Soul Travel Blog uses affiliate links, in this post and throughout the website. You can support by purchasing through these links, which provide a commission to me at no extra expense to you.  These small commissions go towards the ongoing expenses of running this site.  You can also support by sharing content that you like and following along on social media: every like, comment and share counts!

Have you been to Manila or are you thinking of going? Would you add anything to the recommendations here?  I’d love to hear about your travel experiences in the Philippines, you can get in touch with me via the comments form below. 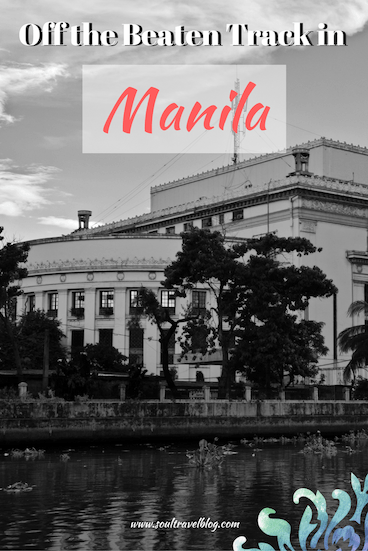 Slovenia Itinerary: The Best of Slovenia in Two Weeks (or less!).

Best Places for Eco Friendly Travel in The...

What this Paradise Island can Teach us about...

Bohol Attractions, Mass Tourism and a Tale of...

[…] 5.  Getting to see a different side to Manila, Philippines, and finding a home away from home there. Manila will not go down as my favourite place in the world, and I think I’m not alone. It’s not by any stretch of the imagination a peaceful or beautiful city. But, after a few days and venturing off the beaten path, my impressions started to change.  You can read about my experiences here. […]