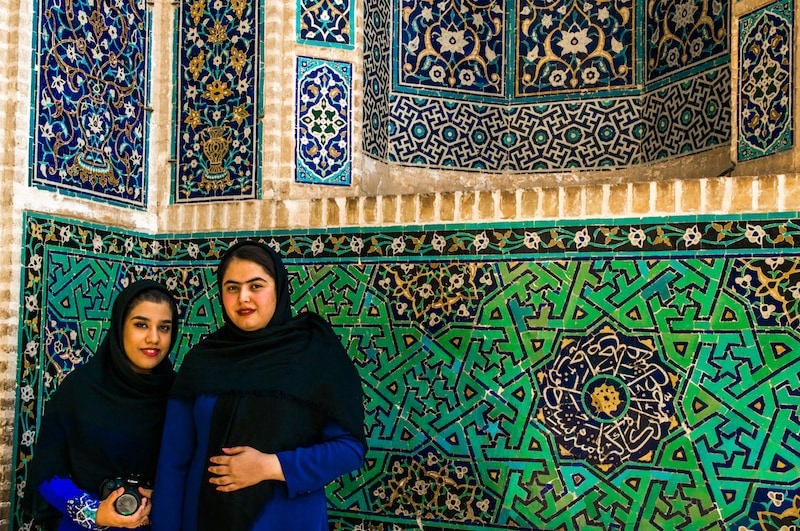 September 6, 2017
FacebookTwitterPinterestRedditStumbleuponWhatsappEmail
Editorial Disclosure: I travelled with G Adventures in Iran for 2 weeks on their Discover Persia trip. In return for a balanced review I was given a discount on my trip. As always, all views expressed here are purely my own and represent the views of Soul Travel Blog.This post contains affiliate links. For more information on what type of organisations I work with, you can read my Editorial Policy.

As a country that is just opening up to tourism on a wider scale, and with unique rules in place for tourists, travelling in Iran comes with its own responsibilities.

The purpose of this post is not to cover the ethics and debate of whether to travel to Iran or not – for more on that discussion read my post about “Why Travel to Iran” here.

Travel that has a local impact.

Given that Iran’s economy was cut off from much of the world by international sanctions – the legacy of which remain strong – tourism may just be a way to alleviate the inflation and economic challenges for every day Iranians.

If you’ve decided to travel to Iran, you’re probably interested in the type of travel that supports local businesses and people as opposed to the Iranian government. So, visa fees aside, is it possible to travel in Iran in a way that gives back to society and the local economy? Based on my time there, I believe so. 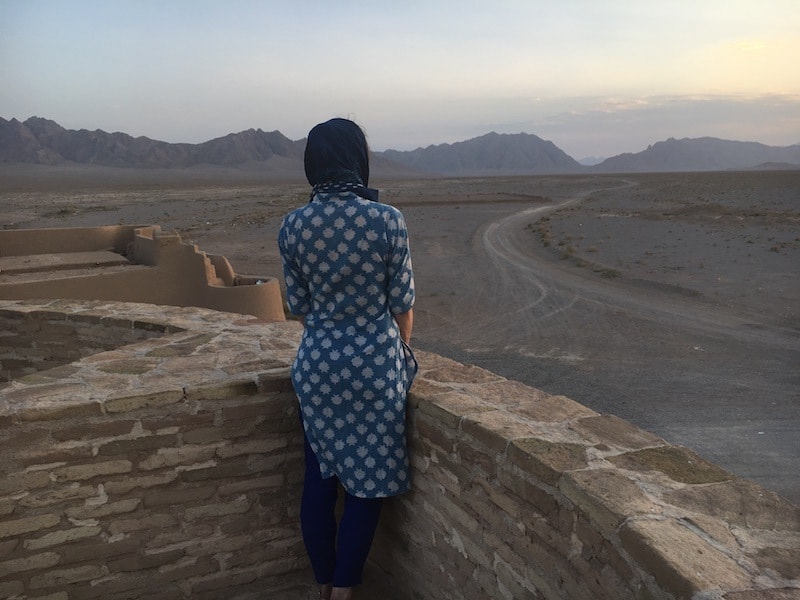 Gazing out from a Silk Route Caravanserai where we stayed near Kerman.

Types of responsible travel in Iran:

Based on where you’re from and your travel preferences, there are two types of travel in Iran. That in a group / with a guide (which is mandatory for Americans, British and Canadians – read more on how to arrange that here), and independent travel.

With independent travel, you are in control of your spending and can choose directly which companies you want to part with your hard earned cash to. With group tours it’s a bit harder – you’re not in control of which hotels you stay in or which local guides are used. But the good news is, there are some group travel companies that put a real focus on responsible travel in Iran and beyond. I travelled with G Adventures who have a global commitment to sustainable tourism.

From my time in Iran and conversations with many that I had there, here are some things to be aware of for responsible travel in Iran! 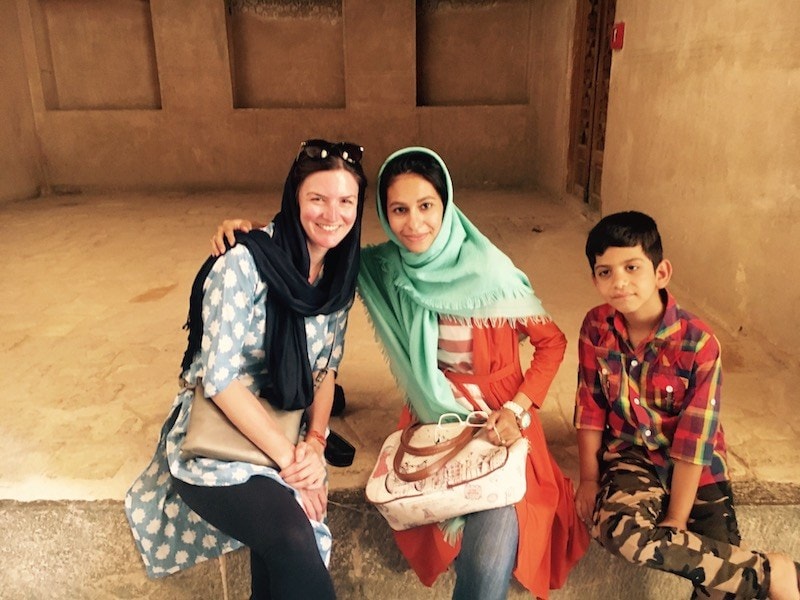 One of the many photo stops with friendly locals!

1) Remember that Iran is largely a (conservative) Muslim country. As a tourist, you are still obliged to wear Hijab – that is modest muslim dress. As a woman / girl over the age of 9 you will need to cover your hair at all times except inside your hotel room or a private house (if offered to remove your hijab and if other ladies have done so). If this isn’t for you, neither is travel to Iran. There are variations in dress and attitudes between the cosmopolitan hubs of Tehran, Shiraz and some other cities vs the rest of the country which is more religious and where people tend to dress more conservatively. Dressing the part and respecting the culture is hugely appreciated. For more on what to wear see my How to Travel to Iran for Americans, Brits and Canadians post!

2) Shelve the political discussions for a couple of weeks.  Speaking about Iran outside of the country is hardly possible without getting into a conversation about politics. Once you’ve arrived in Iran though, remember to be sensitive. The politics of the Iranian government are no more the fault of everyday Iranians any more than the actions of Trump are the responsibility of… well – you get my point. Aside from sensitivities, speaking against the Iranian government is a punishable offence – and personally I wouldn’t fancy a stay of uncertain duration in an Iranian jail. People will also ask you constantly what you think of Iran – and it is appreciated if you give both a positive and honest answer.

3) Choose small, locally owned hotels and businesses to stay at / visit so that your money goes directly to the local economy. Many museums and upscale/luxury hotels in Iran are government owned. If you want your money to go directly to the people (which is indeed probably why you are visiting) then it is best to a) stay at smaller hotels, guesthouses and more budget hotels. Chains / groups of hotels in Iran and luxury/ business type / 4 & 5*hotels are especially likely to be government owned.

If you’re on a budget and not on a group tour then couch surfing can be a great option to meet and connect with locals – it’s very popular in Iran (unfortunately as a Brit I did not have the chance to try it). One of the best museums I visited that was privately owned was the Music Museum in Isfahan (read more about it in my post here). Street food and small cafes are also always locally owned. Eco friendly guest houses / resorts that have caught my eye (but I did not have the chance to stay at personally include): Gileboom, Matin Abad, and you can find some more suggestions from Persiaport blog here.

Want more on Iran? Read my posts on exploring Isfahan or Staying in a Silk Road Caravanserai here. 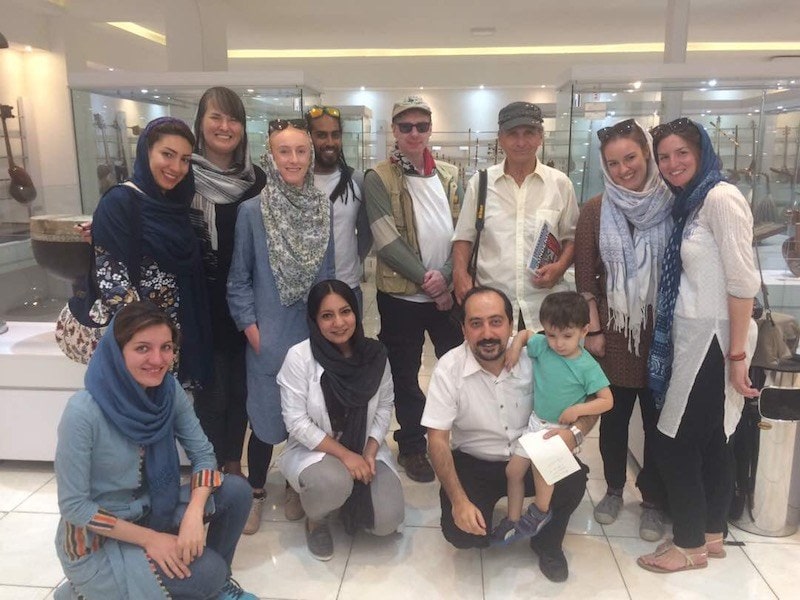 My G Adventures group with the owners of the Music Museum in Isfahan.

4) Avoid adding to Iran’s notorious air pollution problem. My descent from the air into Tehran was through a dark brown cloud of fumes; traffic is definitely not one of the city’s charms. Plagued by cheap gasoline and poor infrastructure for many years, you can do your bit as a visitor by avoiding cars/taxis and private vehicles. There’s also no need to fly within Iran. Tehran has a great metro, and the railway system across the country is much more modern and comfortable than you might think! We took the high quality intercity train from Tehran to Yazd which was very comfortable. As one local said to me: in Iran everything is late apart from the railways!

5) Turn off the taps, except to fill your water bottle. It almost goes without saying that for a desert country, water (or lack of) is an important issue. Visiting Isfahan, it was shocking to see the river beds under the bridges dry. Drought has been increasing in severity for Iran over recent years. In Tehran, our hotel had even put signs up asking people to take shorter showers due to water shortages and low water pressure. You can help by doing the same. 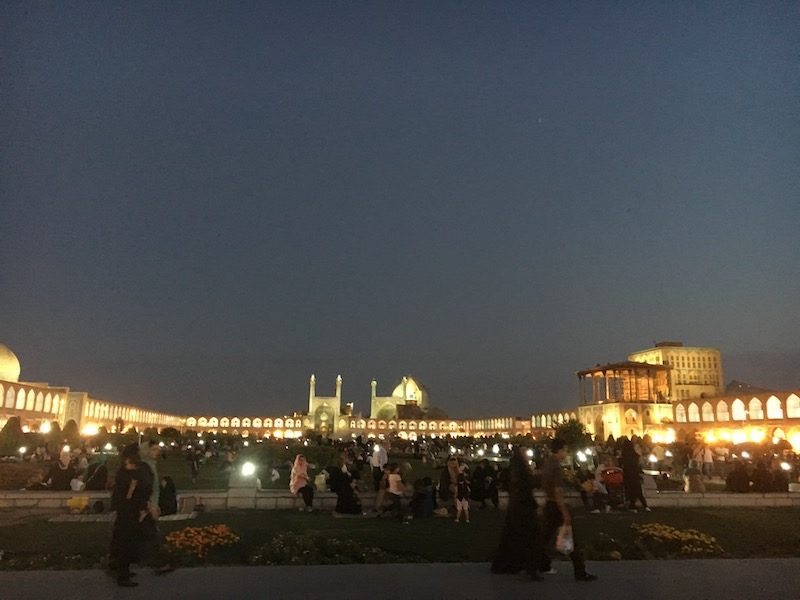 A summer night in Isfahan – picnic with locals and make new friends on the lawn as the temperature drops! (excuse the quality!)

On the other hand, tap water in Iran is safe to drink – so it’s very easy to avoid plastic and buying plastic bottled water by refilling your re-fillable water bottle from the tap. Some hotels / restaurants offer filtered water too. If you prefer to purify tap water to be extra safe you can purify water from the tap too using a handy gadget like the Steripen.

6) Bring your best manners. If you’ve done some reading up on Iran – you’ll likely have come across ta’arof. This is the Iranian system of politeness – whereby offers may be made (and be expected) which are purely out of politeness. For instance – if someone invites you to dinner – it’s best to decline once or twice to determine if the offer is genuine. Accepting something the first time could be a mistake as it may have been offered out of ta’arof! We had a waiter tell us that the bill was on him for our ice-cream – of course we thanked him profusely and then paid the bill in full + tip. It’s just part of showing people respect.

7) Stay Open. If Iran can be generalised in any way, perhaps it is simply to say that it will surprise you, in a good way.

Have you been to Iran? What tips for responsible travel in Iran would you add to this list? Let me know in the comments below!

Great Rail Journeys – Where you won’t Forget the View!

The Best of Sustainable Travel in Amsterdam: A...

Half the World: The Other Half of Isfahan,...

Best Places for Eco Friendly Travel in The...

This is fascinating, Ellie! I’ve never heard of the concept of ta’arof – I could see myself easily messing that one up as a tourist. Thanks for sharing your advice and showing that responsible travel in Iran is a possibility.

Thanks Brianne! It’s such a rich and varied culture. I think actually versions of Ta’arof exist all over the world (perhaps less “extreme”), the courtesy, friendliness and welcome in Iran is so beautiful, I really hope it endures and visitors respect it :-). Ellie