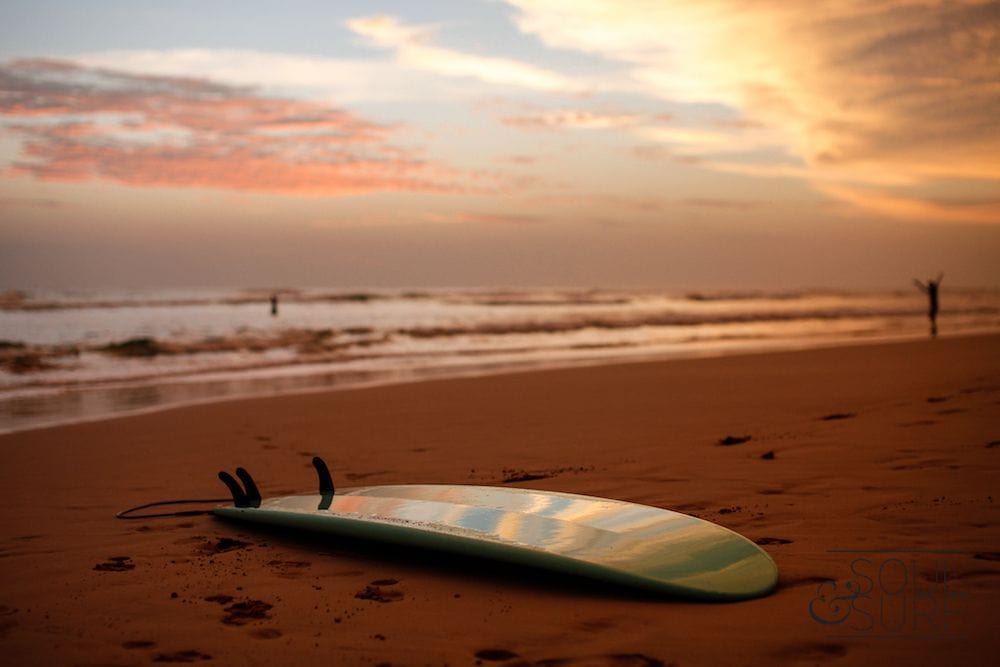 I’ve always loved that popular expression about cycling – that in order to keep our balance, we have to keep moving.

The same could be said of many things I guess, but for me none more so than of surfing, which I discovered for a week last November against the beautiful backdrop for learning to surf in Sri Lanka.

Rewinding a few months before that to my first time that I tried surfing, in Mauritius, the instructor told me—it’s very simple.  You’ll end up where you focus on. So if you’re going to keep looking down, you’re going to keep falling off and into the water with a splash.

So fall with a splash I did.  For most of the next 90 minutes of the lesson. The moments where I caught a wave and focused on the shoreline, lit up in yellow and gold from the setting sun behind us, I rode the wave to the beach.

It’s got to be one of the best feelings in the world, coasting on the waves in a tropical sea on just a board, and it got me eager for more.

Planning a trip to Sri Lanka? We do the hard work for you in our Sri Lanka Itinerary here! 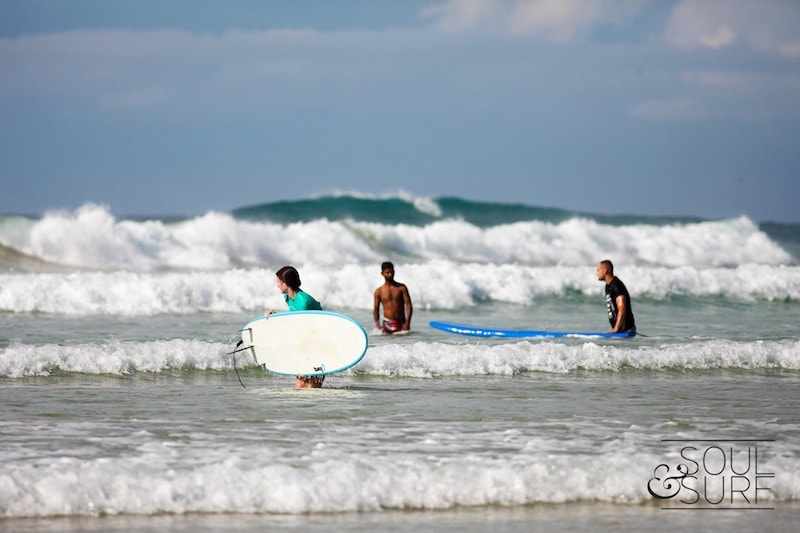 Learn to Surf in Sri Lanka

Back for a second try with a week’s surf camp, booked through Soul and Surf Sri Lanka, who are a surf and yoga retreat.  Set up by a pair of dreamy travellers and established first in Kerala, India, they actively engage supporting local communities.

Based near Ahangama on the South Coast of Sri Lanka, Soul and Surf is located in the perfect spot for beautiful beach breaks. It’s a 10-15 minute drive to the nearby beaches of Welligama and Ahangama where the waves come right to the beach – perfect for those just beginning their surfing journey and keen to learn to surf in Sri Lanka. If you come here independently, there are also some surf schools that offer lessons (although we can’t testify to the quality).

The best season for waves in Sri Lanka is from April – October, which coincides with the monsoon on the south and west coasts of Sri Lanka. We came at the beginning of November when the weather was better, and there were still plenty of waves to catch (they were probably better than the monsoon swells for us newbies anyway). For the biggest waves, surfers tend to head further east to Arugam Bay on the east coast of Sri Lanka.

For a week we ate far too much amazing fresh and local food, skipped the yoga sessions, stayed in beautiful villas and rode in pimped-up tuk-tuks for our twice daily turn to battle the waves at Ahanghama on the South Coast of Sri Lanka. 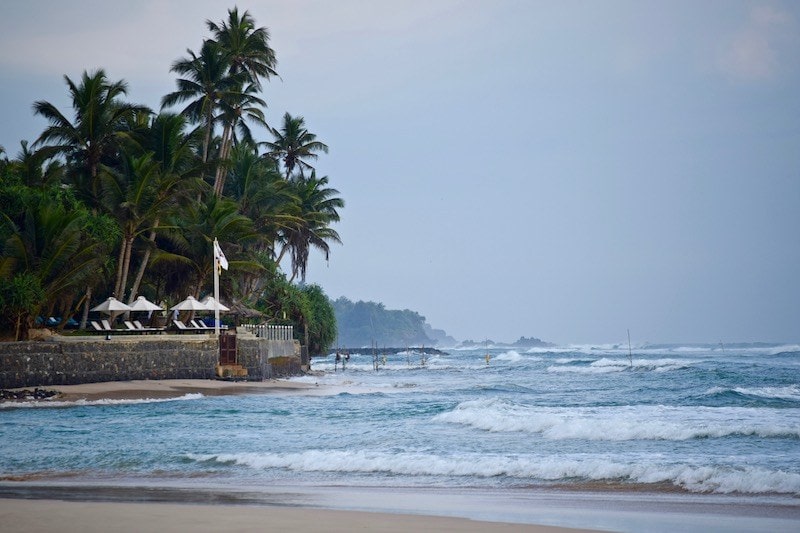 And I do mean battle.

Well for me at least. Others were more like ducks to water.  Me, more like a diving dolphin.

Because on the first day a few things dawned on me.

Firstly, that my honeymoon moment with the lesson in Mauritius a few months earlier had been made so magical partly by the fact that I was being pushed into waves by the instructor.  Which, apparently, makes it a whole lot easier to pop-up and then hopefully stay standing. So my first moments and onwards in the waves were spent not paddling and catching waves to ride, but rather wading through white water, spotting a good wave, clambering on to my board only to be thrown off it by the ocean a few seconds later.

A similar experience could probably be obtained through being put into a washing machine on a 30 degree cycle, with a good dose of salt thrown in.

And so, for my first few days of surfing in Sri Lanka were testing – of my muscles but also my dedication. 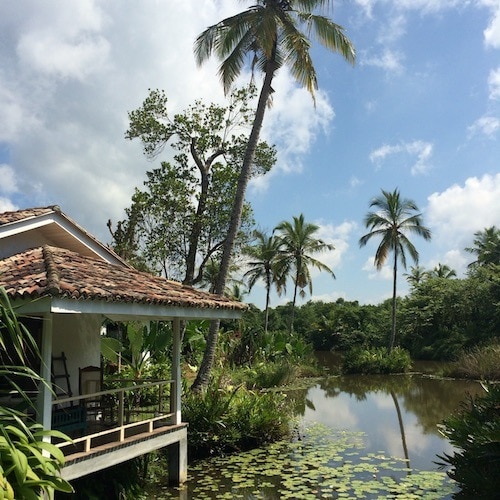 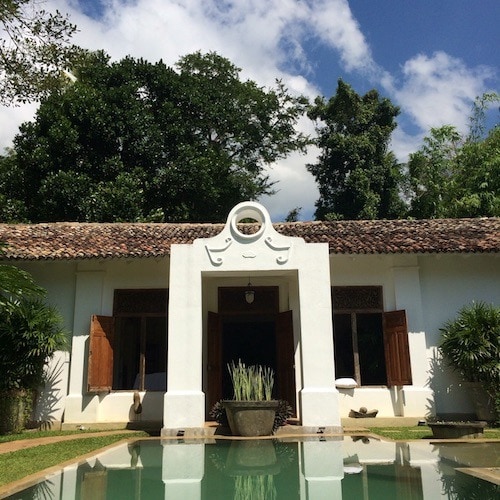 Given the physical toughness of surfing, we wanted to treat ourselves to a fabulous surf camp in Sri Lanka – and with Soul and Surf, that’s exactly what we got. The team and staff members were amazing, and the villa accommodation was seriously high end. The only pity? I didn’t get to laze in bed and enjoy it much!

The rooms are beautiful and are based around two different pool areas: the older house, and a more modern pool area with rooms leading off it in a separate courtyard. We paid for an extra special room which got us a luxurious roll top bath (although honestly, I wish I’d had more time to use it!) as well as a shower with pebbled floor and slatted windows which could easily be opened to give the outdoor shower feel. Some rooms have outdoor showers. 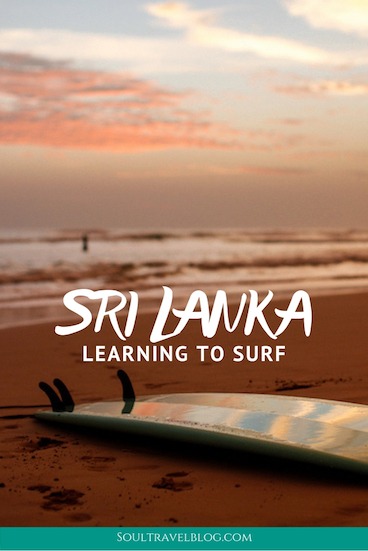 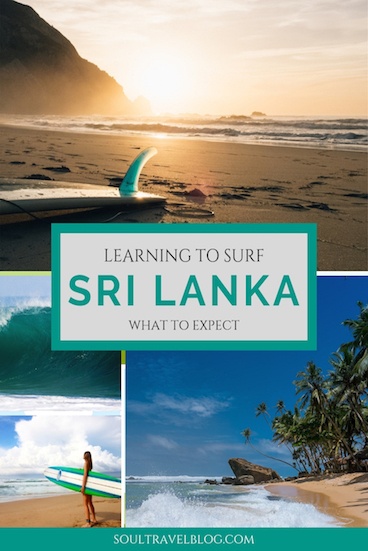 The surfing was twice per day with Soul & Surf (although the evening one was optional for anyone with sore limbs from the morning). Evening surfing quickly became my favourite time of day as we got to ride (or dive) the waves as the sky turned pink behind us. Yoga is also offered daily, too, and there’s a full day in the middle of the week for excursions along the coast to Galle for shopping or Mirissa for whale watching.

Massages and wellness treatments are also usually on offer.

Perhaps the best part of Soul and Surf Sri Lanka was – the food! It was really on a  5* level with different dietary choices catered for and a mix of Sri Lankan and western cuisine. Different specialities were served every day for brunch as well as amazing dinners. Despite all the hard work in the water, I put on a good few pounds from eating too much :-/

Get the best out of train travel in Sri Lanka in our guide to the best journeys here! 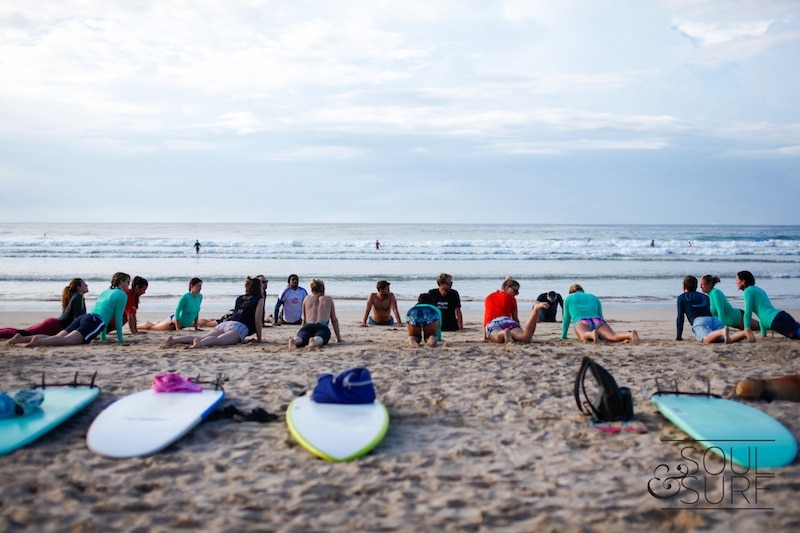 Warm up on the beach – Image courtesy Soul & Surf

I think that’s where the life-lessons really started to kick in.  I remembered those you go where you look towards words, and found that my eyes were firmly on the water.  I also found that my eyes were firmly on others.  Which I happen to believe is an incredibly efficient recipe for sense of failure too.  When we compare ourselves to others there will always be those who seem to be leagues ahead.

In the water there were many who were doing much better, or standing up more, but in the end that didn’t matter.  And when I let go of that worry, I found myself catching my first few waves and riding them.

The surf instructors were dedicated and probably amongst the most patient and determined i’ve met. Long beyond the point where i’d given up on my abilities, they kept encouraging.

The morning sessions seemed particularly challenging—the drying salt from the intensifying sun burning hard on my skin after being churned in the waves somehow, but the evening sunset surf sessions were where I came alive.

In those evening sessions where the sky came alive and flushed with pinks and oranges, my spirit lit up as I tried to drink in my surroundings and the experience. 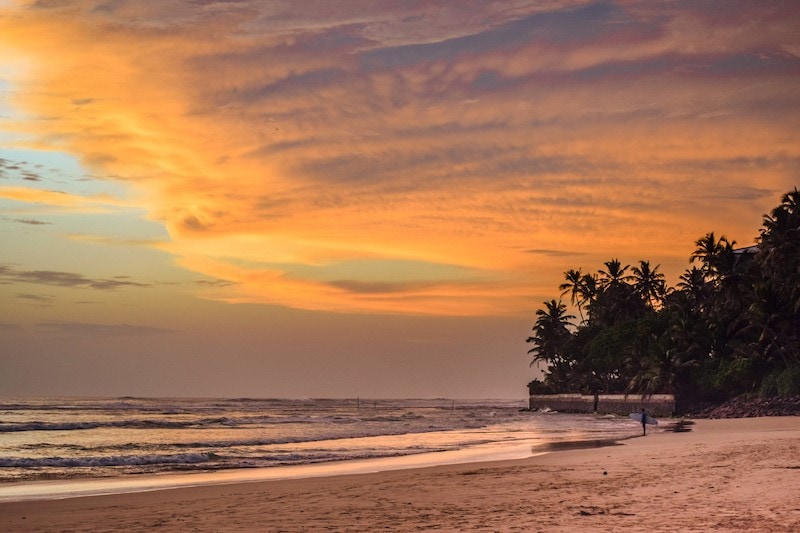 I found that as I focused on the beauty of the place and the opportunity (as opposed to my focus on falling off or feeling like I was not doing myself proud), that my surfing began to change.  Catching more and more waves, success seemed less and less important compared with the joy of being in the clear warm water, on a beautiful sandy beach surrounded by great company.

On our last evening we got the most beautiful sunset as our background.

It could have all ended so perfectly, with me riding the last wave, but it didn’t. Such is life.  My last pop up for the week ended in yet more diving into the waves, but that’s not what stays with me.

After all, it may not be a smooth ride, and there’ll be plenty of falls, but we have to keep on moving and putting ourselves out there. 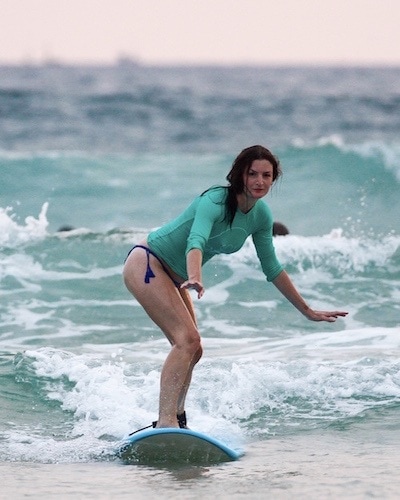 Airline Sustainability: Which Airlines are Best (and Worst)?

9 of the Best BC Wellness Retreats

Transformational Travel: In Search of Something in Costa...

[…] beaches in between Unawatuna and Matara which you could spend days exploring. For those looking to learn to surf in Sri lanka we loved the beach break in Welligama bay and highly recommend surf camp Soul & Surf who offer […]