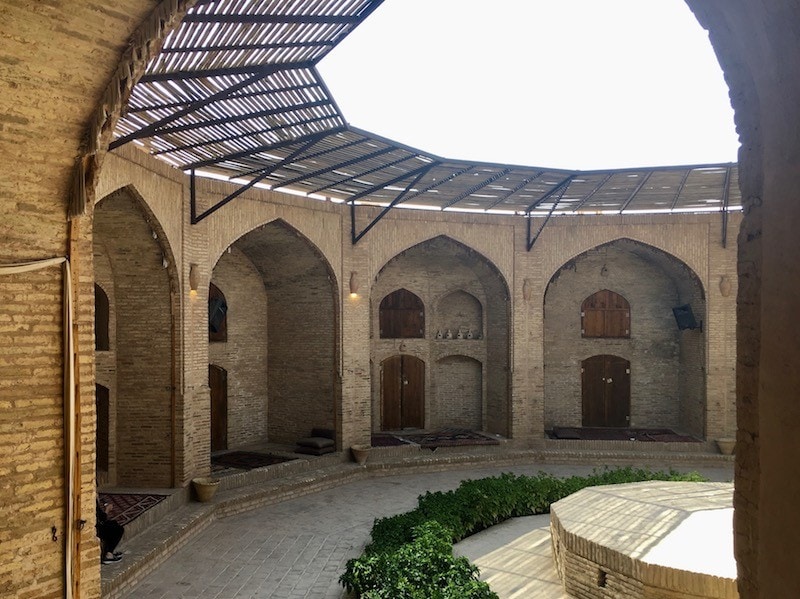 Editorial Disclosure: I travelled with G Adventures in Iran for 2 weeks on their Discover Persia trip. In return for a balanced review I was given a discount on my trip. As always, all views expressed here are purely my own and represent the views of Soul Travel Blog. For more information on what type of organisations I work with, you can read my Editorial Policy.

This post also includes affiliate links – which – if purchased through provide support for the ongoing running costs of this blog to me, at no additional expense to you. Thanks for your support!

Travelling the Silk Road in Iran.

Few things conjure up as much wanderlust – in my book at least – as the idea of travelling the Silk Road.

An ancient network of routes used by traders to plough eastwards towards China and back again, the Silk Road was first established around 500BC. The roads deviated over time and had multiple branches, but broadly speaking passed from Europe across to Syria, Iraq, Iran and then on to the -stan’s of Central Asia before crossing to the eastern shores of China. Beyond silk, the routes saw trading of horses, spices, grains, metalwork, religious objects and much more. 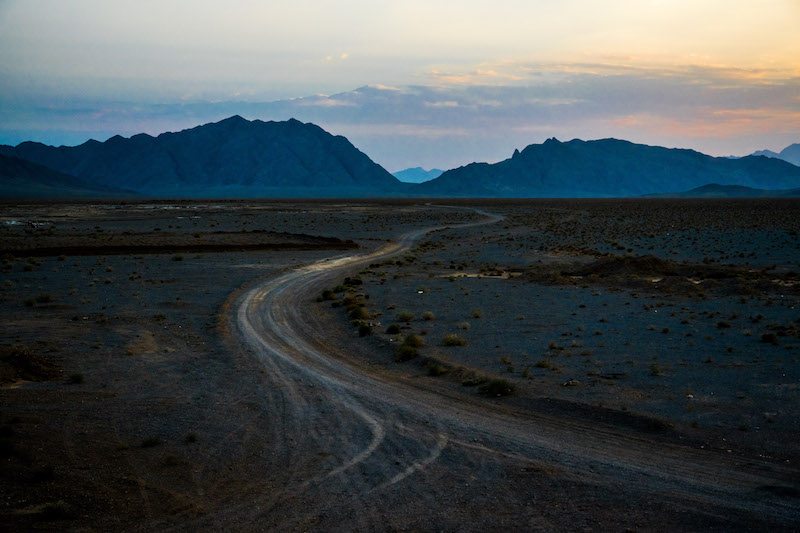 The lost silk roads between the mountains as seen from the rooftop of Zeinodin Caravanserai.

A process of travelling the Silk Roads became established over the hundreds of years, and as much as anything “Silk Road” became synonymous with exchange, meeting and the process of travelling. In the Middle Ages, Silk Road caravans formed, consisting of camels which were used to transport goods and and the traders themselves. 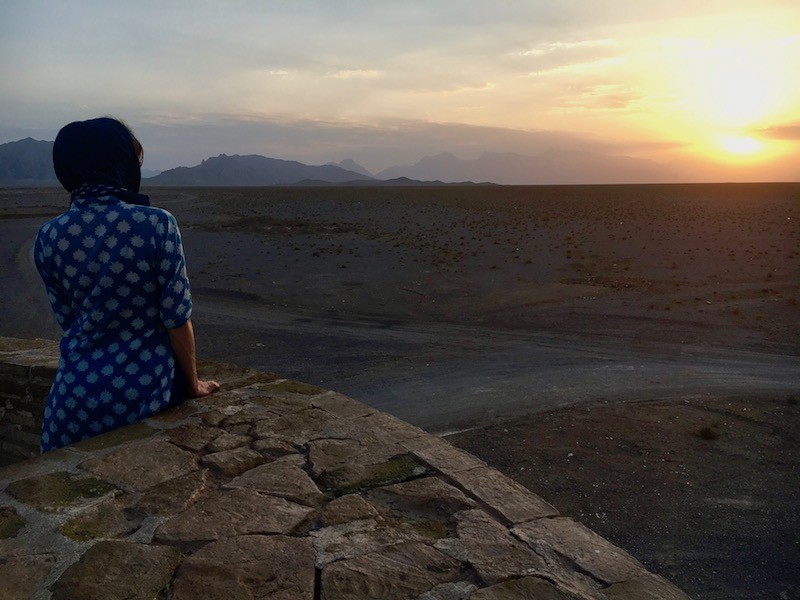 Watching the sun set over the central Iranian desert.

To break down the long distances for caravan tours, Caravanserais – or lodging houses – were set up. The word comes from the merging of caravan (a group of travellers) with sara (meaning home or place to stay). In Iran, Shah Abbas I is credited with building a network of Caravanserais across the country in the 1500’s.

Iran has been at the centre of Silk Road travel for hundreds of years, and that position lives in on some of the Caravanserais where it is possible to stay asa visitor today. 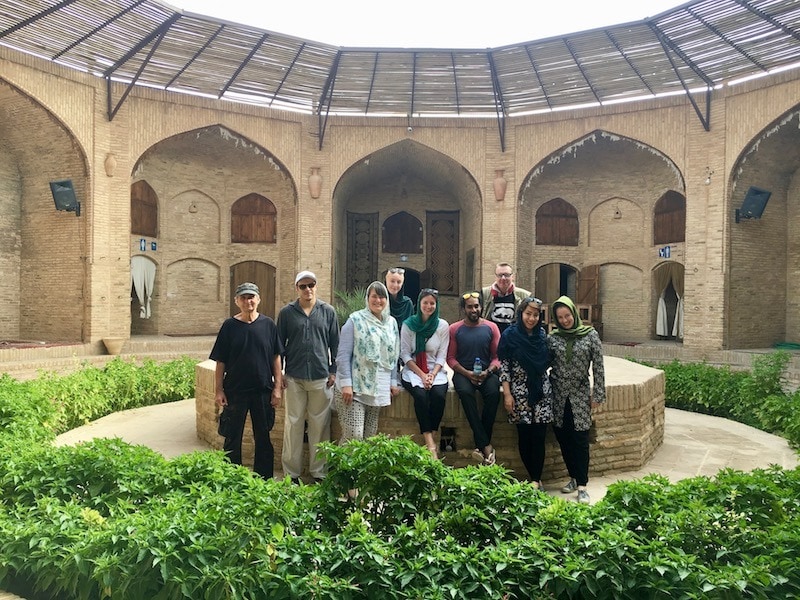 With my G Adventures group at Zeinodin Caravanserai.

The Best of Silk Road Iran.

On my trip to Iran with G Adventures, we stayed at Zeinodin Caravanserai, one of the best known Caravanserais in Iran.

Built in the sixteenth century, the Caravanserai is now over 400 years old. It’s one of only two circular Caravanserai’s in Iran, and occupies two floors. Zeinodin Caravanserai is located just south of Yazd, in the district of Central Iran – what used to be two days’ journey by camel from Yazd.

Even now, its location is next to the main route between Yazd and Bam, and side tracks can be seen leading off into the mountains – evoking the feeling of being on the cusp of an intrepid journey. Aside from the road (less romantic since the camel caravans have given way to heavy goods trucks) there are few reminders that this place belongs in the twenty first century at all.

Read more about how to get a visa for Iran or travel to Iran on an American, British or Canadian passport here! 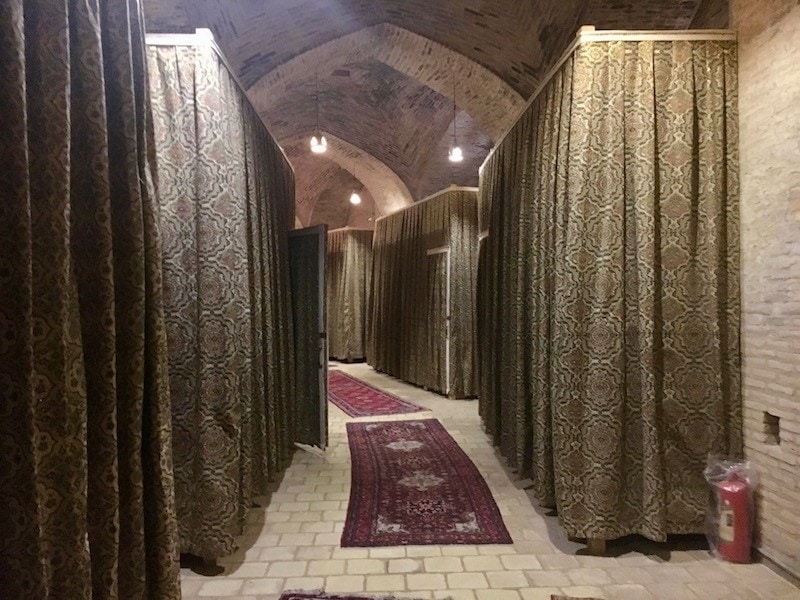 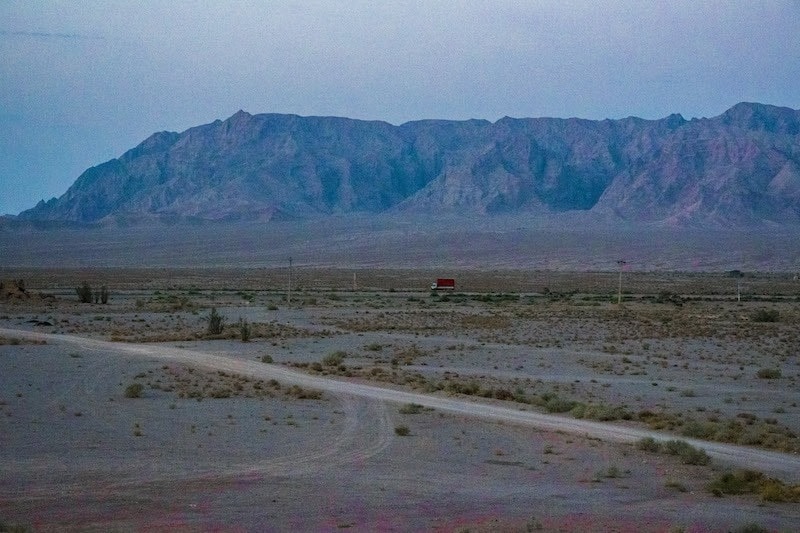 The road though the mountains at dusk…

The Caravanserai underwent a full renovation in 2006, seeing the structure transformed into a simple hotel. The main hallway opens up onto a circular courtyard, around which a number of pretty guest rooms are arranged – these are the rooms which would have been given to traders in years gone by.

The part of the caravanserai which was formerly used as stables, has been tastefully converted into a large open – plan style sleeping hall / dormitory which is broken down into small “rooms” by curtains, which is where my group slept. Bathroom facilities are shared and meant a trip across the courtyard for morning showers.

The curtained off rooms created from the former stables.

The caravanserai is run by a local family of Baluchi origin (the region south east of Yazd), who have been caretakers of the caravanserai for years. Their warm welcome is one that gives you the feeling of staying in someone’s home, rather than a hotel. Many elements of the Caravanserai revolve around common living – with shady spots in the courtyard to relax and read a book, a large communal dining room and plenty of time to chat with the hosts.

The caravanserai features a large, flat rooftop area, which for us was the highlight of our stay. Gazing out into the mountains, many of us watched the sun disappear behind them, as a sprinkling of stars took its place a few hours later.

Sitting in the darkness and the July heat, hearing only the sounds of the road, the barking of dogs nearby and seeing the stars over the mountains in the sky was definitely atmospheric. Of times gone by, of movement, of travel, and perhaps of an existence on the Silk Road. After all, hadn’t we come to do the same thing? To meet as travellers, learn things about this new place, and to seek a warm bed for the night.

How to Get an Iranian Visa in London, UK.

Half the World: The Other Half of Isfahan,...

Why Travel to Iran?!

[…] Want more on Iran? Check out my post on getting off the beaten track in Isfahan here or Staying in a Silk Road Caravanserai here!  […]

[…] Jordan’s first Ecolodge. The concept and design of the lodge echoes that of a traditional silk road Caravanserai; where camel caravans would break their journeys en route to China in the days of the Silk […]

[…] Want to get further off the beaten path in Iran? Read about my experience Staying in a Silk Road Caravanserai here!  […]