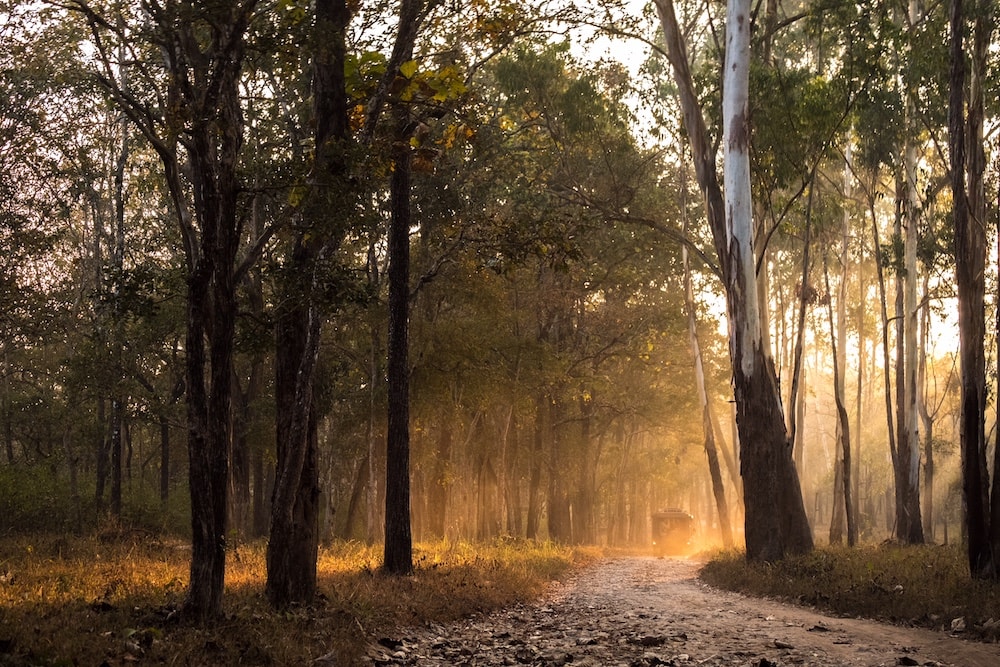 Tiger Safaris in India: A Guide to Seeing the Bengal Tiger

This short guide to tiger safaris in India covers our top tips for seeing tigers in India, our recommended tiger parks, what you need to know about tiger safaris and much more!

A Guide to Tiger Safaris in India

So many who come to India dream of seeing a tiger.

In 2015, I was one of them, and I was also one of the lucky ones. With only 2 days at Bandhavgarh National Park in Madhya Pradesh, my odds weren’t particularly high. But somehow my visualisation of seeing a tiger worked, and one crossed the road right in front of our jeep in the early morning sunlight.

Out of several hundred visitors to Bandhavgarh that morning, only our jeep and one other saw that same tiger. And that’s the beauty of tiger safaris in India: In many parks it’s beautifully old-school – drivers don’t radio each other, zones of parks are closed seasonally and the main navigational tool used to track down tigers is listening for alarm calls across the forest.

Meaning no crowds of jeeps around tigers, and a true sense of adventure.

Things have changed a bit since 2015. For India’s tiger population as well as for tiger safaris.

In this quick guide to safaris in India we’ll cover what you need to know about tiger-spotting in India, how to plan and book, and where our recommended places to go tiger-spotting are.

What's In this Guide:

Since my visit to Bandhavgarh in 2015, India’s tiger population has increased by a whopping 33%.

Clearly great news for a species that is still heavily endangered, India has been a success story in the focus on tiger conservation, and is now home to the vast majority of wild tigers around the world. The 2019 census of the tiger population showed fruits from the work of India’s “Project Tiger” as well as many passionate conservationists, responsible tourism initiatives, and individuals.

But the challenge remains for India’s tigers. Tigers are well known for requiring huge territories to roam in. Solitary creatures, each adult tiger requires a territory of around 200sq kilometres in order to live a healthy life. Some parks, such as Bandhavgarh are full to the brim, with simply not enough space for more tigers.

Although petitioners and campaigners have been calling for the creation of more “tiger corridors” which allow tigers the freedom to move between parks and roam wider terrain, there is a direct and sometimes literal competition for space between India’s tigers and its booming human population of over 1.2 million.

As populations and urban centres increase, tigers find themselves competing with humans for space.  With tragic consequences for both humans and tigers.

Areas where tigers were free to roam even as recently as a few decades ago have been broken up, so that only small sections of land remain and tigers become isolated in their patch – unable to roam widely, come in contact with other tigers and therefore breed.

Often, the humans closest to the tigers are India’s poorest, reliant on land for farming and agriculture. When tigers stray and eat a few goats belonging to a farmer, things often don’t end well for the tiger. Just this year four men were arrested in Uttar Pradesh for beating a tiger to death.

If the mighty Bengal Tiger is to have a real hope of thriving in the future, we need to change the priority conservation is given vs the need for development.

The biggest threat facing tigers today is simply lack of space and human encroachment on their terrain.

What to Expect on a Tiger Safari in India

During my visit to Bandhavgarh, thanks to non-use of radios or tracking equipment, we were the lucky few to get a sighting that day.

In a national park covering over 1,530 sq kilometers, the roads are well spread out with dense grasslands and jungle in between, and drivers forbidden to drive off-road: All meaning reduced chances of seeing a tiger from afar or deep in the jungle or undergrowth.

And so we went about wildlife-spotting the old-fashioned way.  Our naturalist and driver listening intently in the early morning air to the bird calls and noises of the jungle.  Moments of silence punctuated by the rustling of animals in trees and their calls. They were listening for alarm calls—the calls that deer and other creatures let off when they see a predator such as a tiger to warn away other would-be-tiger-prey.

We spent what felt like hours sitting and listening.

Trying not to move and just to be silent.

Eventually we heard enough calls to pin down a location, and we saw the tiger initally in the distance, almost camouflaged in the long grass.  Steadily she crept towards us before disappearing behind a thicket.  There were two other jeeps nearby and the drivers started calling to each other, telling each other to move back. They predicted, correctly, that the tiger was about to cross the road in front of us, so we should make space for her.  She crossed not more than a few paces in front of us.

Seeing wildlife in a relatively free habitat walk that close in front of you is what I can only describe a humbling experience.

For those moments, I felt entirely present—nothing else mattered, I was just in awe of this stunningly beautiful and fearsome creature who looked at us as if to say “oh, you lot again” before going about her business.

READ MORE: 23 of the Best Eco Lodges in India

Tips for Seeing Tigers in India

Now that we’ve established that seeing tigers is on the tigers’ terms, not ours, here are a few of our tips for increasing your odds with tiger spotting in India:

ⓘ TIP: Travel Insurance is a must for India – we use and recommend World Nomads – Get your quote here!

How to Plan & Book Tiger Safaris in India

Given the popularity of tiger safaris in India, you need to book your accommodation and safaris well in advance. Ideally, you want to book several months out (4-6 months, or as soon as you know your itinerary).

All tiger reserves and national parks in India have daily quotas of visitors that are allowed in; if you don’t get there in time, you may miss out.

Some parks have a number of different zones, some are thought to be “better” (or less busy) than others. We suggest reading up in detail on the National Park you plan to visit to find out if you want to visit a specific zone. With other parks, it’s just luck of the draw on the day.

There are two ways of booking safaris in India:

Our Favourite Tiger Reserves for Safaris in India

Madhya Pradesh has the greatest number of tiger parks in India and is the original “Jungle Book” landscape. Many people come here, and it’s one of the best areas to see tigers in India, but it’s also one of the most popular, meaning it gets booked up and busy during peak season (Nov-Feb).

In no particular order, here are some of the parks that get the best reviews / we recommend:

READ MORE: What to pack for your trip to India

The Future for Tigers in India

Several projects are underway to restore tiger corridors—the opening up of much larger sections of protected land that flow into each other—to avoid the permanent extinction of this wonderful animal.

Something that will stay with me from my experience in Bandhavgarh four years ago was the reaction of some of the other jeeps that were lucky enough to see the tiger that day. Instead of being delighted at seeing the tigress, their immediate demand was: “Ok now find us the father and the cubs”.

Can it really be that we have become so used to being entertained that we view wildlife as simply an entertainment—where national parks become zoos—and those working in the parks as guides feel compelled to serve up the perfect sighting to their tourist customers.

It makes me realise that actually, not seeing a tiger is not necessarily the worst thing.  Far from meaning that they have become extinct, it could be a future indicator that their room to roam has grown again, and that, as they had done for centuries before, that they can live undisturbed away from humans.

And how can we help? We can help by always respecting wildlife, only attempting to see wildlife from safaris at a distance and by truly appreciating nature. We can make sure we never support activities that allow us to interact with wildlife (riding, cuddling, taking selfies) or anything that interferes with an animal. We can also help by going to less visited national parks and staying at environmentally friendly lodges (like the ones listed above) whenever we can.

This post is dedicated to all those who devote their time, money and energy to protecting India’s beautiful tigers.

Have you been on a tiger safari in India? How was your experience? Let us know in the comments below.

Read more about Travel in India on Soul Travel Blog:

What to Wear in India

First Time India: How to Prepare and What to Expect

Panchakarma in Kerala: Lessons from My Ayurveda Experience in India

Ellie your photos are stunning. The cubs and the tiger drinking are just amazing. Definitely on our bucket list and thanks for the tip about when to visit.

Very helpful article. Would love to go to India to see the tigers. And, in a small jeep with no one else around is heavenly. Thanks for the tips. Keeping this for when i go.