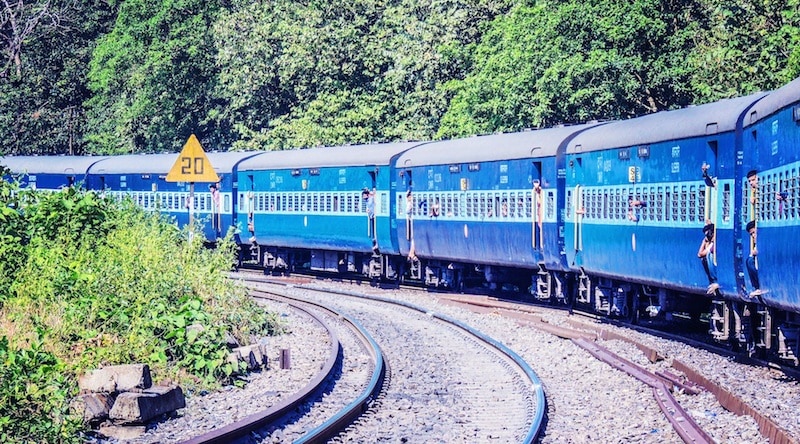 Night Train to… The Land of Kings.

For me there’s something inescapably romantic about the names of the train routes in India.

Regardless of the reality of a long journey, it’s far more tempting to get swept away by names like the “Island Express”, the “Yoga Express” or the “Deccan Queen”. This time it was the turn of the Mumbai – Jaipur Superfast Express.

Thinking of travelling by train in India? You can read my posts all you need to know to book train travel in India (for foreigners) here, or my tips for safe train travel for (solo) female travellers here.

By Train from Mumbai to Jaipur.

At a distance of 1211 kilometres by rail, the Mumbai – Jaipur Superfast Express takes 18 hours to wind its way through the states of Maharashtra, Madhya Pradesh and Rajasthan, to reach the desert state’s capital of Jaipur. Super fast that may not sound, but the ability to fall asleep on a comfortable bunk and wake up the following morning half way across the country without having to go through the hassle of airport security, still amazes me. Honestly, and carbon footprints aside, I can’t see myself ever wanting to do it otherwise. 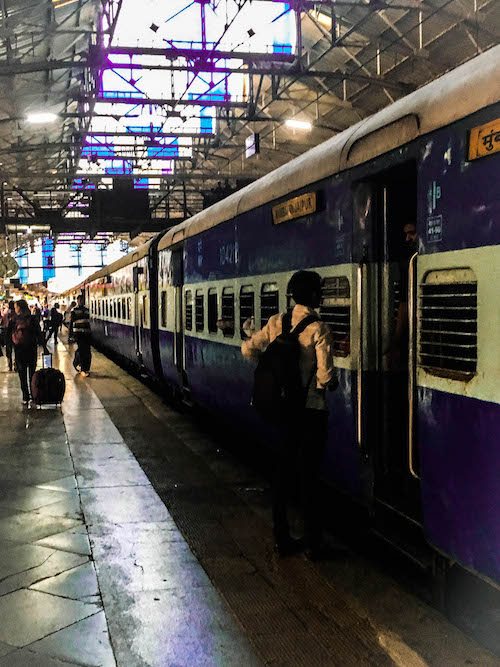 Booking my ticket from Mumbai to Jaipur was a of less fairytale. Arriving in India without an Indian Railways account, I had to book my first train tickets through travel agents after my arrival. Trying to book a ticket about a week in advance, it came as little surprise that trains were fully booked, with long waiting lists. Trains in India are not a turn-up-and-go affair. After trying a few different dates and trains, it became clear that the best option would be to book a First Class ticket – which due to its cost – had a far shorter waiting list than the other (AC) sleeper classes. I’d be 2nd on the waiting list for spot in First Class.

Spoiler Alert: First Class costs around double of the class below (2AC). Based on my experience on this trip, I would say is not worth the extra if you have the choice! It’s still cheap (around 40 USD/EUR) compared to the price of a sleeper train in somewhere like Europe, but incredibly expensive by Indian standards. First class carriages don’t include fancy extras like washbasins or WC’s – they’re still at the ends of each carriage. The main benefit that First class brings is a compartment with a locking door.

The day I was due to leave Mumbai, my ticket finally confirmed. Heading off to Mumbai Central Terminus, I was excited to be heading to Rajasthan, to its colourful cities, deserts and forts, and to seeing friends. Finding the train and my spot was an easy process of checking the carriage number and reservation chart printed next to the door. I definitely recommend reading up on how Indian Railways reservations work before travelling if you’re not used to the system. 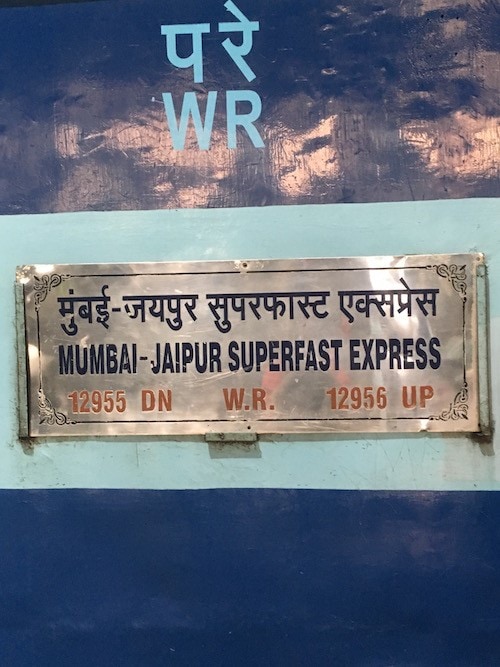 Unlike the rest of the carriages on IR, First Class is divided up into compartments, of either 4 or 2 bunks. The Reservation Chart is planned in a way that avoids older travellers being allotted top bunks, and solo female travellers being paired with an unknown male traveller in a 2 bunk cabin. Paperwork? Yep, that’s just the start of it.

I was on an upper bunk in a 4 compartment, which to start with was just me and another older lady. The lady turned out to be the wife of a former Minister in India! She spoke fluent English and we chatted for a good while about Mumbai and the town of Kota in Rajasthan where she was travelling to for a family event. She also seemed most amused by my wearing of Indian clothes (Kurta and Indian trousers). Clearly my attempts to ‘blend in’ weren’t particularly working.

About 3 hours after leaving Mumbai, just as i was tucking into my bunk to sleep, an elderly couple joined us in the compartment for the other 2 bunks. They didn’t speak any English, but we established that they were travelling to Jaipur, like me. 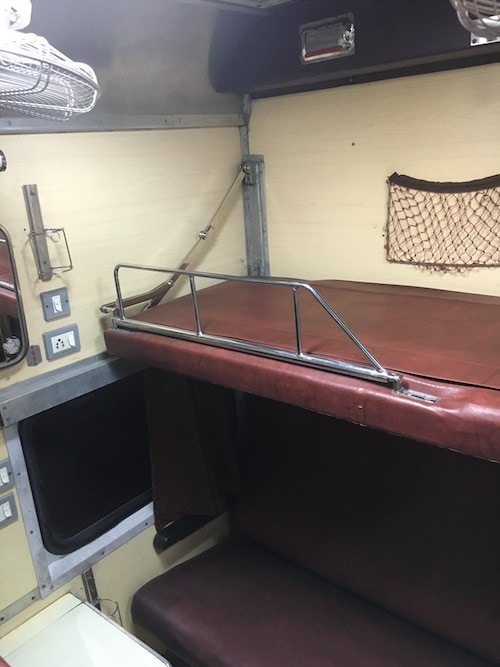 Inside my 4 birth first class compartment.

I was just dozing off when I was woken up by a jolt from the train. Trying to sleep again, I became aware that the nice lady below me was snoring like a bear. And I mean the kind of snoring that makes it impossible to sleep. What felt like a few minutes – but must have been a few hours later – I was awoken to the elderly man’s phone ringing. Which everyone seemed oblivious to apart from me, but eventually his wife started shouting at him to answer the phone (presumably) – which was enough to wake him up. He then proceeded to answer the phone and shout loudly into it too.

A few minutes later we were returned to near quiet (as quiet as it got with the bear snores). I drifted off to the gentle rocking of the train only to be woken up another few minutes later by all the lights going on in the compartment. Apparently the man who had just been on his phone now needed to get out to go to the bathroom at the end of the carriage, and needed the light to do so. His wife shouted loudly at him again for good measure.  This pattern of light going on, wife shouting, one of them leaving the compartment (with the light left on) and returning to bed happened about 6 times between 1am and 6am. 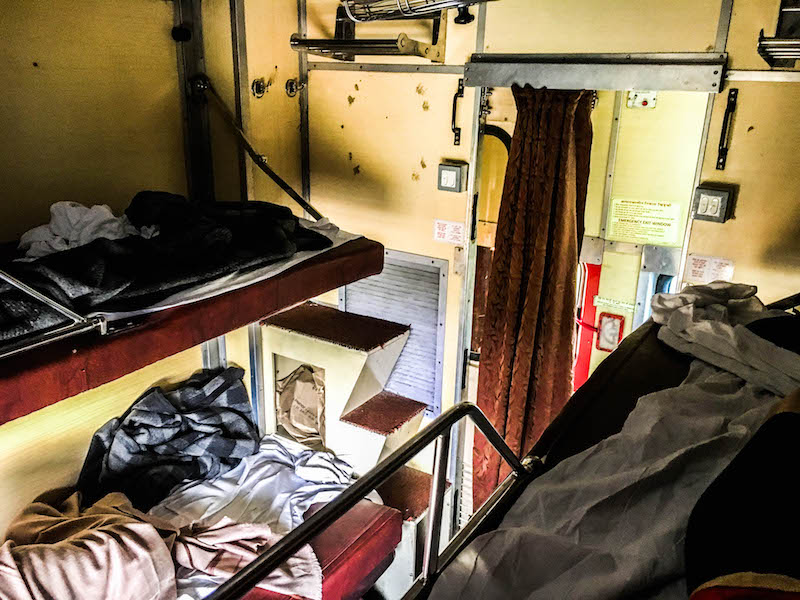 The view from my bunk.

I’m pretty sure my travel agent must have made a request for me to have been put into the noisy compartment!

That’s the thing about first class. You’re stuck in a  small space with who you happen to be put with. Which could be great, or not. 2nd and 3rd AC sleeper class are completely different in that you still get the padded bunks, bedding, sealed windows and air conditioning but the carriages are open plan with the bunks against the walls. 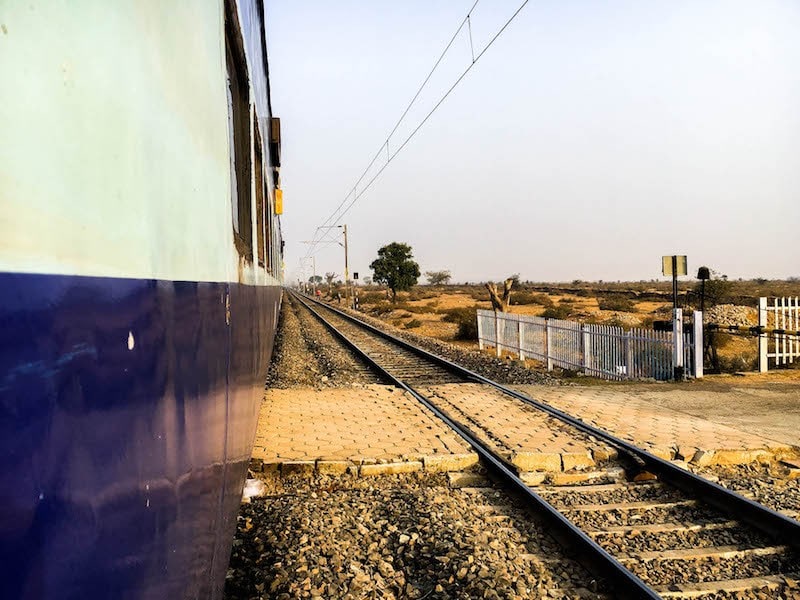 But despite the dramas of the night, get some short stretches of sleep I did, until I was awoken in the morning. This time not by cellphones, shouting, snoring or lights, but to the familiar and comforting calls of “chai, garam chai” from the chai wallah walking down the train. By that time I was grateful for the sugar and comforting sweet tea.

Walking along to the end of the carriage, I sat on the footstep of the open doorway of the train, which had stopped on a straight, flat section of line waiting for a signal to change. As the early morning sun started to glint on the tracks and warm the crisp air, I could see small farms in the distance, and women dressed in colourful Rajasthani dress carrying earthen water pots. Cattle and goats ambling along at their own pace along the roadside. 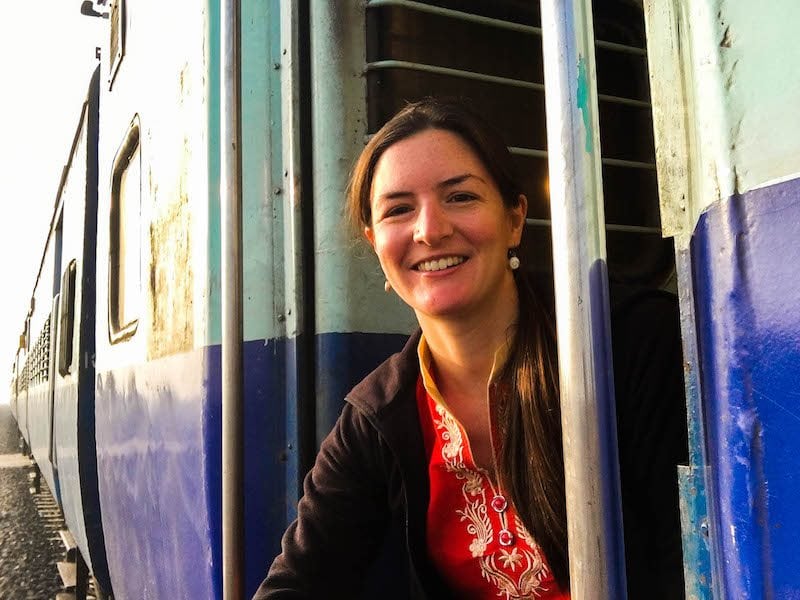 Enjoying the view from the doorway…

This was what I’d come for. Not for the bear-like snores or nights of little sleep, but to be able to watch the sun rise and shed its golden light over the flat planes of northern India, from the train. As the train wended its way further north, closer and closer towards Jaipur, barren fields gave way to lush greenery. If this is the desert state, I thought, It’s also a state of contrasts. At midday, the train from Mumbai to Jaipur pulled into Jaipur Junction station. Only 1 hour late, I’d arrived!

Have you travelled by sleeper train in India? What was your experience like? Let me know your thoughts in the comments below. 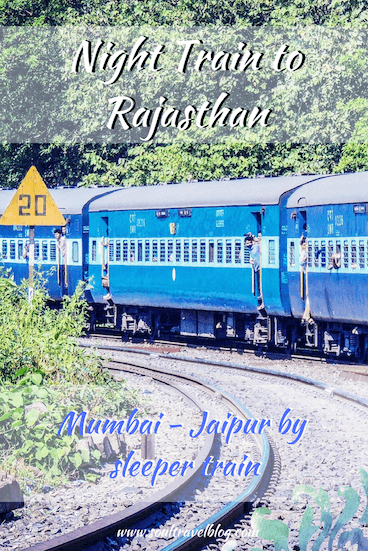 […] not a fan of my one and only experience in first, mainly as I ended up in a compartment of snorers (you can read about that one here).  On some special Radjhani Express trains, meals are included. It can however be a good option if […]

What a lovely post plus it is so relatable. I have travelled all my life in trains all over India. The longest duration of a journey was when I travelled from the northeastern corner to the southern tip of my country. I have fond memories of travelling in the sleeper class as well during college days. I know the snoring can be a real pain and most of the Indians lack the basic travel etiquette. I apologise to you for the same. But I am also glad that you got to experience a train journey in India which by all means must have been an enriching experience. P.S. I just love your blog.

I have read your other articles as well. Your work is genuinely very informative and fun to read. Keep sharing such amazing pictures of trains in India. Kudos