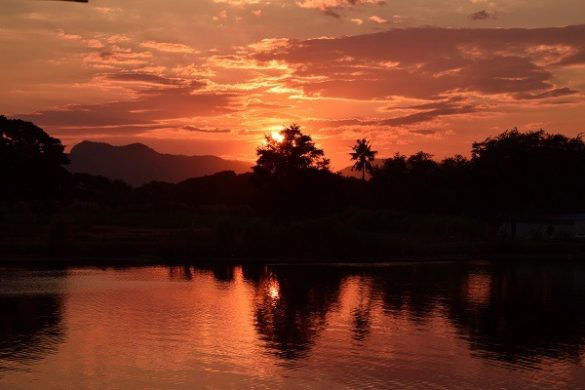 To Hellfire and Back: Travelling the Thailand – Burma Railway.

Looking out at the way the river meets the jungle that meets the mountains in a perfect crescendo of nature, I’d never have guessed that this natural beauty was once witness to something near hell.

The “Death Railway ” was built during World War Two between 1941 and 1943 with the aim of linking Thailand to Myanmar (Burma) by rail so that Japanese forces, who had invaded Thailand at the time, could move weapons, soldiers and equipment into Myanmar and push the allied forces further back into India and beyond.

During less than two years of building this railway, over 100,000 people died. 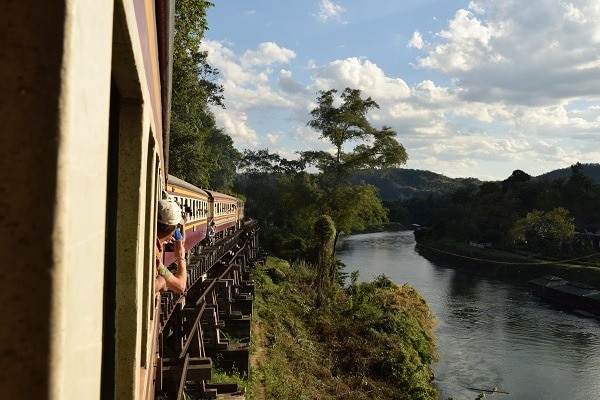 I’d heard about the history of the Death Railway at school, but it wasn’t until watching The Railway Man which stars Colin Firth and Nicole Kidman (a watch I recommend) on a flight last year that I learnt some about it. When I arrived in Thailand a week ago the history/railway geek in me knew that I had to go and see it.

The Death Railway itself starts in Nong Pladuk, about 50km west of Bangkok, where the line meets the Bangkok – Singapore express route.  From Nong Pladuk it weaves slowly northwestwards through dust bowl suburbian planes to Kanchanaburi – home to the infamous Bridge Over the River Kwai After the train crosses the river and legendary bridge the scenery becomes steadily more spectacular with jungle, mountains, and the winding river to the left hand side.  The train comes to a crawl as it prepares to creak over the pack of cards wooden bridge, or Wampo Viaduct. 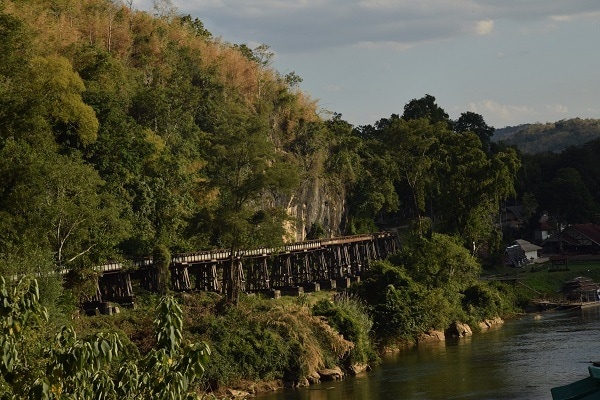 The line today runs up to Nam Tok, about half its original route up to the Three Pagodas Pass and into Myanmar.  In 1945, at the end of the war, the British tore up four kilometres of track on the Thai side of the border out of fear that Karen separatists would use the railway as a supply route into Myanmar.  The remainder of the railway was passed to Thai control, but was deemed not profitable to run the majority of the route and so fell into disrepair, was dug up, or was flooded. Trains still run today, largely as a tourism venture, from Bangkok’s Thonburi Noi station up to Nam Tok and back again, taking about five hours in total.

Soul Travel Blog uses affiliate links throughout the site and in this post, which provide me with a small commission on products or services purchased through these links, at no extra cost to you. Thanks for your support!

On reaching Nam Tok, I went to visit Hellfire Pass.  It was here that many of the lives were lost as prisoners and asian workers were forced to work through the night through monsoons and stifling heat, malnourished and using only hammer, chisel and dynamite to carve cuttings through meters of dense limestone rock.  Hellfire Pass got its name from the flickers of flames and torches as the captive workers worked like ghosts through the night. 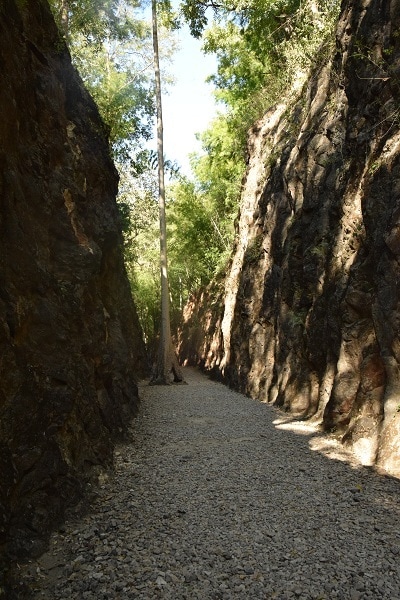 The conditions, either in work or at the squalid camps, or through torture at the hands of the Japanese and Korean guards brought the death toll for this railway to over 100,000 lives in less than 2 years.

I’d always been under the assumption that those lives had all been prisoners of war: British, Australians, New Zealanders, etc.

But alongside the 12,000 British Dutch and Australian deaths, there were up to 90,000 Asians who were recruited as labourers – initially promised good wages and living conditions – from Malaysia, Thailand, Myanmar, Indonesia and even India, who died.

The tributes today – from the cemetery at Kanchanaburi that is maintained lovingly by the war graves commission and tended by Thai women – to the tributes of western governments, particularly Australia are profoundly touching. Two very informative museums, one in Kanchanaburi  and one at Hellfire Pass have also been set up by Australians.

These places moved me deeply.

Want more of Thailand? Check out this 25 day Thailand Itinerary (including Kanchanaburi) 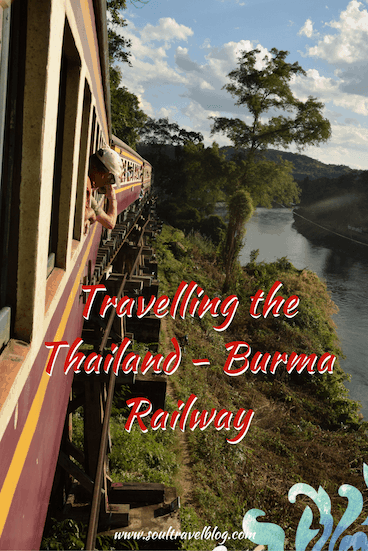 It’s a strange feeling sitting on a train moving along a track when you know how that track has been built.  The journey in itself might seem a bit morbid, but I was moved by the number of Asian tourists, Thais, and school children that were making this trip.  In both directions, the train was packed.

Practicalities: Getting There, Away, and Where to Stay

Option One would be to explore the Thailand Burma Railway as part of a day trip from Bangkok. Taking the first train from Bangkok to Nam Tok allows you to take in the entire route, alight at Nam Tok to visit Hellfire Pass (you’ll need to take a Song-Thaew or taxi from Nam Tok), and take the afternoon train back to Bangkok the same day. The journey from Bangkok to Nam Tok takes about Four and a half hours.

This option is a lot of train for one day (9 hours if you do both ways) and does not allow you any time to explore Kanchanaburi. I’d only encourage this option if you only have one day. If you have anymore time, instead I would recommend…

Option Two is to take the train from Bangkok Noi to Kanchanaburi and base yourself there for one or two nights. On day one take the morning train from Bangkok Noi to Kanchanaburi. Find places to stay in Kanchanaburi here. I stayed in budget VN Guesthouse which is on the river (some rooms are on the floating section on the water which is really relaxing!) and has amazing views from the restaurant. For the afternoon of day one explore Kanchanaburi, go take photos of the Bridge over the River Kwai, wander around the war cemetery and visit the Death Railway museum in the town.

On day two, take the morning train from Kanchanaburi up to Nam Tok and explore Hellfire Pass from there (same as One Day itinerary) and from there either take the train back to Kanchanaburi, or to Bangkok if not staying another night. I found that this was the perfect option for travelling the Thailand Burma railway.

The ever-helpful Man in Seat 61 has loads of information and train times to help further in planning this trip.

Option Three is one I do not personally recommend, as you will not get to ride on the train, but there are many tours from Bangkok by bus which take you to Kanchanaburi to see the Bridge Over the River Kwai. If you prefer not to be herded around in a large group—then avoid! 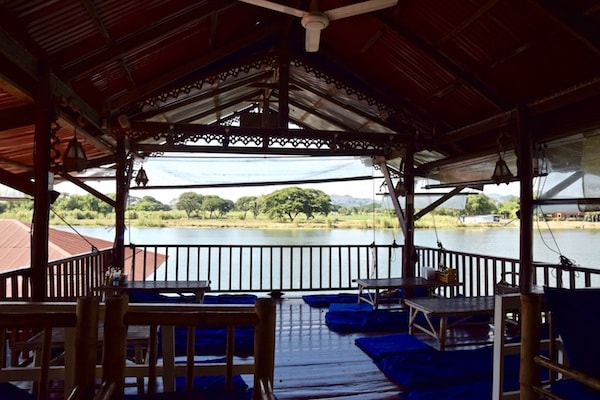 The view from VN guesthouse cafe.

Learning from the Death Railway

Less than two years after the completion of the railway, at the cost of 100,00 lives, the railway line had been taken out of use and partly dug up.

Was it all for nothing?

I’ve always believed strongly that we need to know about these terrible events of history. We need to arm ourselves with knowledge and understanding of what happened, and even more importantly – why it happened. Lest we Forget has never been more relevant.  We live in an age where there isn’t a world wide war going on in the way that they happened in the last century, and yet, everywhere we turn (or open up our browsers or facebook feeds) there is violence, suffering, injustice, forced labour.

It’s easy to blame the Japanese for the barbaric treatment and torture of the workers and prisoners on the Thailand – Burma railway, and in this specific case, that would be right.  A handful of officers were tried for war crimes after the end of the war, but those at the top saw little if anything in the way of repercussions for what happened.  But most importantly, nationality is not the important thing here: it’s what humans are capable of during times of fear.  No country has a clean record, not 1000 or 100 years ago, and certainly not now.

And, in case we think that forced labour, undernourishment and intolerable working conditions are a thing of the past, let us cast our eyes to Qatar in preparations for the world cup, where the estimated death toll of south asian workers is between 1,200 and 4,000. Or to Bangladesh where thousands of men women and children are paid peanuts to work in the sweatshops that power fast-fashion.

These lessons from history are far from learnt.  We have a duty to question the suffering, and hold our leaders accountable.

And as for the Thailand to Myanmar Railway, one wonders how long it will be until the railway is fully rebuilt.  Myanmar is reportedly looking into re-building the derelict tracks on its side of the border to boost tourism to the region, and with rapid economic growth and unprecedented border freedom between the two countries a railway connection would seem highly desirable.

One can only hope that if such work does go ahead, that those who build the tracks will be treated and paid in a way that the dead of this railway would approve of.

In memory of all those who died building this and all other railways. 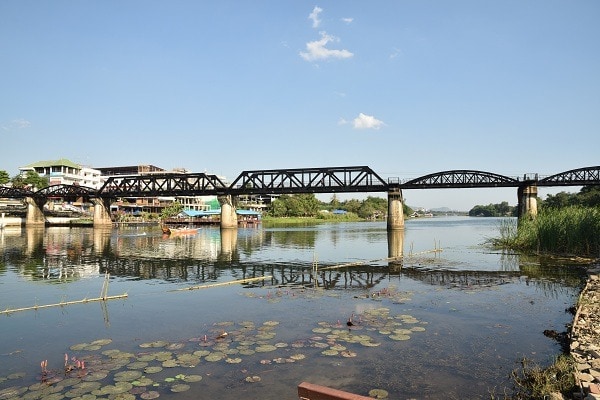 Photo: The Bridge Over the River Kwae in Kanchanaburi 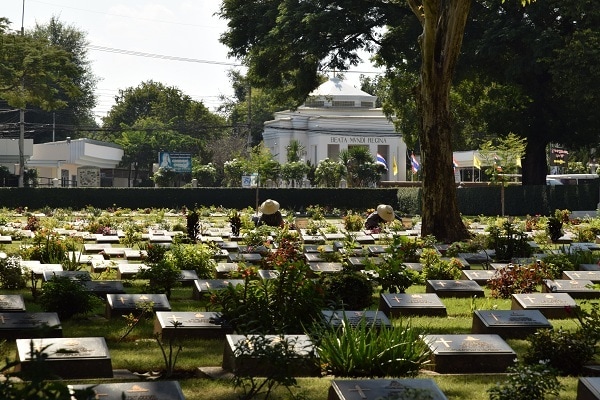 Photo: The Cemetary in Kanchanaburi where many of those who lost their lives are buried.  The Cemetary is maintained by the War Graves Commission.

Night Train to Lisbon: Amsterdam to Lisbon by...

The views on this railway look stunning. I’ll be traveling from Thailand to Myanmar in March but will most likely be flying just because I’ll have a limited amount of time there. I enjoyed reading about the history of this railroad too. Really cool read 🙂

Thanks Diana for your comment! I hope you enjoy your time in Myanmar and Thailand, such beautiful countries! Ellie

Wow, that number is absolutely staggering, not to mention that it happened in only two years. Definitely a somber experience, but it’s also good to know that many people are making this pilgrimage in remembrance of those who suffered and died to build the railway. Thank you for sharing your experience, I hadn’t heard of this before.

thanks Monica for your comment – yes it’s definitely a somber experience but also very beautiful! Thanks for your kind words. Enjoy your travels, Ellie