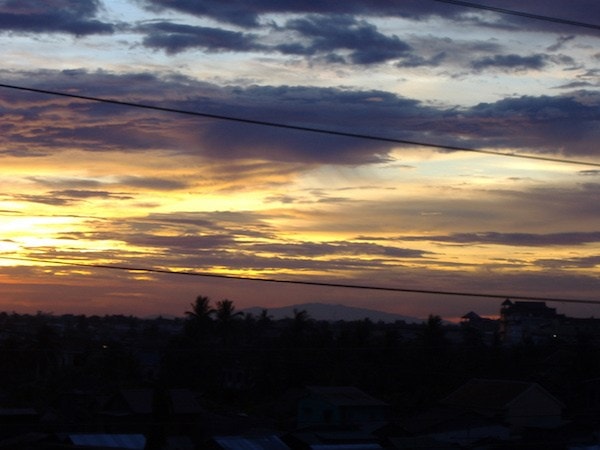 This post is part 1 of a 2 part series—in part two i’ll be asking some additional questions and exploring ways to create the best impact when travelling to developing countries.

Standing amongst a group of 150 or so travellers after 14 hours on a plane, I was beginning to wonder if I’d ever see my passport again.

My first experience of Phnom Penh in 2006 was standing in the airport immigration area, huddled in a group of accidental travel companions, waiting for our visas, our heads lifted towards the glass screen where officials were holding up passports once they had been processed; with everyone squinting at the pictures to try and identify their own passport.  The immigration equivalent of an identity parade.

After months of saving up post studying, I’d decided it was time to volunteer and travel.  I wanted to travel but also do something good, so i’d been studying for my TEFL qualification too.  Six months later I had found a UK organisation who i’d applied to and paid to be placed on a teaching project for 3 months in Cambodia.

It turned out that my TEFL was not even needed.

Visa secured and passport reclaimed, my first time in Asia, I was soon on the back of a Tuk-Tuk, whizzing down one of Phnom Penh’s wide boulevards in the hot and dusty sunshine, trying to understand why the motorbike in front of me had chickens tied upside down by their legs to the handlebars and foaming at their mouths.

As part of the package I had paid for, I was staying in a house on the outskirts of town along with 9 other volunteers via the same company who were volunteering on different projects in Phnom Penh, ranging from 4 weeks to 3 months in duration.

Details of what exactly my teaching assignment would be were sketchy before I arrived in Cambodia, and after arriving, I was taken to a meeting by the Organisation’s Country Manager with Cambodian Students who had set up the school foundation that i’d be teaching at. As opposed to teaching in a state school, i’d be teaching in a charitable school which had been set up by the university students to help children learn better English beyond the lessons provided in main schooling or available to the few who could afford private tuition.  On leaving the meeting I was none the wiser what to expect from my teaching assignment other than that the next few days were public holidays so i’d not be starting teaching for another week.

Walking into the school on my first day I was confronted with a mud-hut, 40 children between ages 6-11 with wildly varying levels of English waiting for me to teach them for the coming 3 hours. 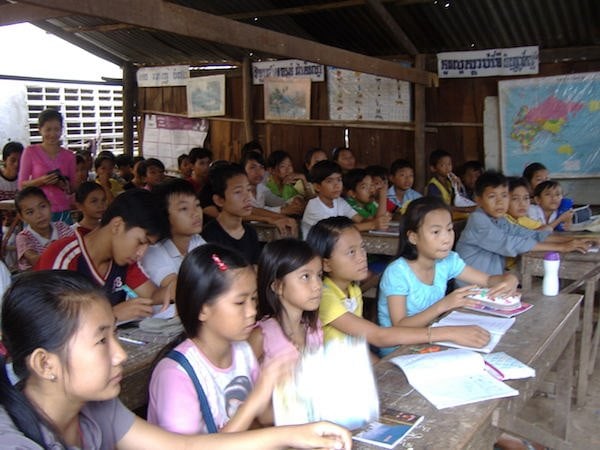 Above: My class of students in southern Phnom Penh.

Drawing on my reserves from being a teaching assistant in the UK and what I had learned during my TEFL, over the coming weeks I did my best to entertain them for the 3 hour windows.

My biggest moment of learning came after I discovered that the books I had bought for the class (photocopies of English language textbooks, the only type of books readily available) that I had then given to the students had been sold by most of them and the money used for who knows what.  The situation only improved when one of the Cambodian university students offered to come and help with the teaching of the class and she could help translate what I was saying into Cambodian so that the younger members of the class could learn more.

At that moment I realised just how out of depth I was in the situation, as someone who had no idea as to the cultural and educational norms in the country.

I realised that in this place that was so foreign to me, I had no idea what was really going on.

My intention had been to help and to create a positive impact through donating my time and money.  Even with the experience that I had had of being in the classroom in the developed world (most volunteers that I spoke to who went through the agency did not have that, or any teaching or care qualifications) I now question if I did any good at all.

Cambodia in 2006 seemed like a country with a bleeding heart.  A country trying to recover from decades of genocide and civil war under the Khmer Rouge.  Unlike some of its neighbouring countries, Cambodia didn’t have the ‘benefit’ of an outside enemy to unite against—Cambodia was torn apart from within.  Today in 2016 (although I have not been back to witness it first hand) Cambodia is still ranked as one of the world’s poorest and least developed countries. 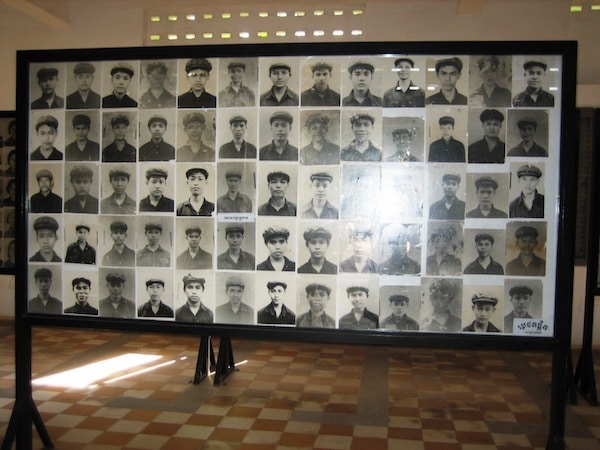 Above: Boards of thousands of faces killed during the Khmer Rouge genocide at the Tuol Sleng Museum.

In recent years various organisations, including UNICEF and Friends International have released detailed reports and campaigns highlighting the negative impact of Voluntourism in Cambodia, particularly that of so called Orphanage Tourism—where tourists pay a fee to volunteer (for a number of hours or days) to help care for children in the orphanage.  The tragedy is that in many of the so-called orphanages the children actually have parents and should in any case be at school, however it is far more lucrative for the parents and owners of the orphanage to make money from tourists who genuinely want to help; but end up financing this vicious circle.

I believe that many of the most memorable stories begin not with a beginning, but with an ending. Because of my experience of voluntourism in Cambodia, I know now, that for me I will never engage in voluntourism again unless I can be certain that it is actually having a proven positive impact.

Reflecting on my experience from 10 years ago, the benefit of hindsight, knowledge and age has brought many learnings from my experience there.

So I share here with you the top lessons I learned and what I would do differently now, in the hope that it helps others to make better informed decisions about volunteering whilst travelling.

I’ll be covering some more questions and ways to proactively support NGO’s and proactive social work in more positive ways, and how we can help overcome voluntourism in Cambodia (and other countries) along with further resources in my next post—part 2—later this week. READ PART 2 HERE.

Have you been involved in or experienced voluntourism, volunteered yourself or worked for an NGO? I’d love to hear about your experiences.  Join the conversation by leaving a comment below!

[…] You can read about my experiences volunteering in Cambodia & what I learned here. […]

[…] during your time in Nepal, we suggest reading our guidelines on Volunteering & Voluntourism here first, and avoid any volunteering opportunities that include contact with vulnerable groups of society […]

I will be pleased if you can read and post your suggestions here: